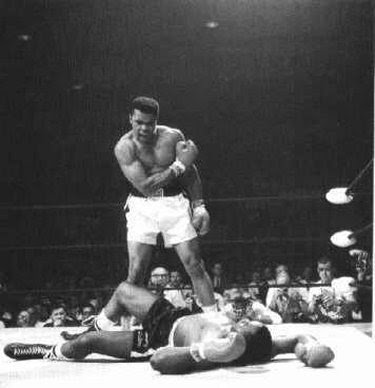 There he is, standing over Sonny Liston, in Lewiston Maine, May 25, 1965, having thrown "the phantom punch." Only a real boxing aficionado could tell you that former heavyweight champ Jersey Joe Wallcott was the third man in the ring that night. (And only a real boxing trivia buff could tell you that Jersey Joe, who when he won the heavyweight championship at age 37 became at the time the oldest person to win the title, was born Arnold Raymond Cream. "Jersey Arnold" just doesn't have the same ring to it.)

You can see a tape of perhaps the most controversial first round in heavyweight championship history HERE.
Don't blink, or you'll miss the vicious left that puts Liston on the canvas.


Ali trained right here in Miami, at the 5th Street Gym, which is no longer in existence.

We will tell you that upon arriving on the shores of our fair city, a young Rumpole dumped his possessions in a small apartment and ambled down to the 5th Street Gym in Miami Beach to just take in the history of the place. Later, we jumped a little rope and hit the heavy bag and speed bag a few times, and climbed into the ring, just to be able to say we put on the gloves in the same place where Ali trained in the sweet science.

See you in court, where we often say that we float like a butterfly and sting like a bee;
the prosecution can't convict what their witnesses didn't see.
Posted by Rumpole at 3:19 PM
Email ThisBlogThis!Share to TwitterShare to FacebookShare to Pinterest
Labels: Muhammad Ali

I liked him better when he was simply Cassius Clay.

Adrien wraps up Monday arraignments. "Any lawyers out of turn on the miscellaneous calendar?"

Fed Blog has herald article on arrest of the gang guy that had a u-tube video taunting the police.
"Won't see him no more".

Somebody thinks someone looks like Ali. Made it up for a minute, until an alert reader emailed us that is was ridiculing the person for the way they look. Down it comes. Better luck next time.

Watched the fight in Miami Beach. Liston refused to come out for the next round. Finally understood what "FIX" meant - even though I loves Clay/Ali.

No matter how hard you look, you'll most certainly miss the "vicious left" that puts Liston on the canvas.

It was Clay's right.

Thanks for that hint. Now I KNOW who you are (since you told me that story about the 5th street gym), but it is best that you not be named.

A Friend Who Can Keep The Secret

judge reemberto diaz suffers first reversal where the 3d found the state properly confessed error when diaz found a wife of a def. should be detained on the charge of armed trafficking where there was no evidence she had any knowledge of a firearm in her husbands house where she did not live.see chantel rodriguez v. state opinon out on tuesday.ramanded for the trial judge to set a reasonable bond!!!

Well friend- I was in town, and out of town, and back in town, for several months and a few years before I decided to stay and be a lawyer here. Plus I cannot recall telling anyone this, so perhaps you are thinking of someone else. It was a popular spot to go if you liked Ali and were a boxing fan.

Yeah, it was a right hand not the left. I always thought that Liston was counted out but I see from the film that he got up. I never knew that. The ref then halted the fight as he did not make it up by 10.

I too once went to the 5th street gym and saw my hero, Ali, train I guess I have no life, because I will never forget it.

And I too frequented the gym as my father was friends with Chris & Angelo and I have fond memories of that great old place.

Yes it was a sharp right. Liston was down 17-20 seconds. But because Walcott was preoccupied with Ali, he allowed Liston to get up and started the fight until people at ringside shouted that Liston was counted out.

You never heard Liston complain about the count, which always made me suspicious.

One of the great back stories of the Ali-Liston photo involves two different photographers. If you look closely at the photo, between Ali's legs is Herbie Sharfman, then a grizzled veteran photographer for Sports Illustrated. Because of his seniority, he got to choose his position at ringside to photograph the fight. Herbie chose what he thought was the "A" position. The second SI photographer was a relative rookie named Neil Leifer. He got the "B" position. The rest, of course, is history, and Neil ends up capturing one of the most enduring moments in all of boxing. Leifer's photo is wonderful not only for its portrayal of Ali as larger than life, but also for the image of Herbie when he realizes he has just seen the flip side of the serendipity coin.

That isn't Judge Diaz's first reversal, Trialmaster. Maybe the first involving you which is of course all you'd care about. But the PD's office got that noted liberal Judge Rothenberg to grant a writ on a case where Diaz held a guy no bond illegally about 6 months ago. That, to my knowledge, was his first reversal.

FAKE MUHAMMAD ALI SAYS; Float like a butterfly, sting like a bee, the older I get its harder to pee. I fought Joe in the thrilla in Manilla, now I hope the nurse gives me ice cream with chocolate and vanilla. No viet cong ever called me nigger so I refused to go to Vietnam and pull a trigger, they then took away my license a convicted felon became me, then they made a big movie - their way of saying sorry. Boom bayee, boom bayee they chant my name, presidents even put me on a goodwill train, but back in the u.s. blacks are left out of the game. when I die many will mourn my passing, but right now I just want to have less gas passing. Parkinson's disease sure is a bitch, I miss my friend Howard who was never my bitch. I invented the rope a dope, my hands were so quick, now I need Viagara to harden my dick. Happy birthday to me.!

for the record, the trialmaster is not involved in the chantel rodriguez case.