Florida is back baby! Yup, once again numero uno in the nation in new covid cases.  So let's go over the numbers as per the CDC:

70,000 new cases a day in the US last week, and Florida, one state out of fifty is responsible for more than 20% or those.

COME TO FLORIDA =SEE IT AS A NATIVE! 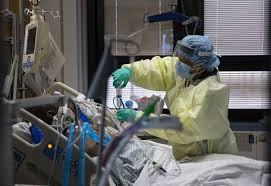 When the CDC recently recommended that all children returning to the school in the fall wear masks, Governor De No Science Santis IMMEDIATELY signed an executive order preventing school districts requiring school children to wear masks. Because if Covid is killing (which it is again) and the pandemic is raging (ditto) then science sucks in Florida!

"No scientist is going to tell me what to put in mah arm and that makh kid should wear no damn mask to school" is what Mr. and Mrs. Yahoo in Two Egg Florida say to each other as they pull into the Piggly Wiggly to buy chips and beer for breakfast. "What do they all knows anyhow?"

Well, true, the immunological experts  did not stop at a HS equivalency degree. And true, they don't work three gig jobs and load boxes for Amazon. Just ten years of schooling and ten years of post grad work in virology, but why should anyone listen to someone who has spent a life time studying a subject?

We first identified this phenomenon when POTUS 45 was President-elect. He was at a rally somewhere in the middle of the country and he had just decided to nominate James Mattis as his secretary of defense, mostly because he liked the nickname "Mad-Dog." Now, outside of Rumpole and the military establishment, no one really knew that James Mattis was an aesthetic monk-warrior, who spent his life time committed to the military and lived a simple lifestyle surrounded by books.

Yet when POTUS 45 announced to the crowd he was picking "Mad-Dog Mattis" as the new secretary of defense, they paused for a moment, because not one damn one of them knew who he was, but then someone started yelling and clapping and then more and more and soon the crowd was screaming  in ecstasy over someone they had never heard of, but because the President Elect thought he would shake things up, they were going to scream in joy.  Because people are reveling in their ignorance and they want to be led. Angry at only being smart enough to obtain a minimum wage job, they are some how forming a belief that intellectuals caused their problems. So, when an ignorant anti-intellectual becomes their leader, they buy into the anti-expert tirades.

There is a certain unexplainable joy dumb people have in being told to disbelieve their eyes and that the experts do not know anything.

Covid spreads almost entirely through respiration. SO DO NOT WEAR MASKS!

Now here is the thing about No Science De Santis and we told you first- he is 100% running for president regardless of what POTUS 45 does. And he has POTUS 45's playbook. If an expert says to do this, he says do not do it! If common sense tells you to wear a mask, do not do it. You are an American. You have a god-given right to not listen to experts.

When your appendix bursts- go to the gas station not the ER. Who says a surgeon is best qualified to remove a burst appendix? Only experts and we know not to believe them.

When you get in an airplane, ask a passenger to fly it NOT the pilot.  Who says a pilot can fly a plane better than anyone. They crash all the time, right?

Why should teachers teach from history books? The South did NOT lose the civil war. Fake news.

And on and on and on, with appeals to conspiracy theories like 5G causes cancer and covid, and that the people who attacked the capitol on January 6 "were regular tourists" (this was actually said by a Republican Congressman in Congress last week).

So. Do Not Wear a Mask. DO NOT get vaccinated. Do not pass Go, do not collect two hundred dollars, but come to Florida, the land of ignorance. Get Covid (just a small cold) and go to a freaking 7-11 when you get sick and ask the counter person to treat you.

Posted by Rumpole at 2:30 AM
Email ThisBlogThis!Share to TwitterShare to FacebookShare to Pinterest
Labels: Florida, Governor Ron DeSantis, moronic idiots

Let me get this straight. You want people who don’t get vaccinated and wear a mask to die but you want my kids to wear a mask to protect the same people from getting covid and dying.

Do you think that people actually enjoy reading this ultra liberal prattle? Why don't you write about court stuff, and if you are so unhappy, why not move to California where your thoughts are mainstream?

Thirteen (13) individuals who worked at or visited the locations and on the dates listed below have tested positive for COVID-19.

Persons identified as having been in close proximity to the confirmed individuals are being notified and will be asked to take all necessary precautions.

Seems like DeSantis is intentionally trying to kill Floridians.

What they are doing to the 1/6 rioters/protesters is disgusting. Of course rump you will forget everything you stand for, watch them sit in pretrial, and let those who committed no violence be called "domestic terrorists." Congrats you have shown your true colors. "Good riddance" sums up people like you.

9:41, Rump bashing aside (which is never a good idea), do you really think that 1/6 was ok, or that those who attacked our Capitol should not be prosecuted/punished? I always read this great Blog, but very seldom comment, until knuckleheads like you take indefensible stands. Like Colonel Jesup said in A Few Good Men, “All you’ve done today is weaken a country”. Wake up !!

To follow up on the comment I just sent, is there anyone out there who HONESTLY believes that if Black Lives Matter had stormed the Capitol on 1/6, they would NOT have been met with deadly force? If so, please defend your position, cuz I’m just not seeing it.

In 1954 5 Puerto Rican terrorists stormed the capitol. They all got life. That the terrorist who stormed the capitol on 1/6 and viciously attacked law enforcement are getting county time is a disgrace. Frankly, most of this insurrectionist scum should be spending their lives in prison and anybody who attacked a cop while actively rebelling against the United States and its constitution should be shot. These sentences only encourage the rabble to do it again. 9:41 is probably a Putin plant.

347
Are you suggesting violent force wasnt used on 1/6 by police?

The 1954 incident was a premeditated attempt to murder. Shots were fired and multiple people wounded.

Are there any possible differences between 1954 and 1/6 that your pea brain could recognize?

The 1/6 insurrectionists can fairly be described as having committed treason.

The Capitol Building is not some abstract thing or some far away government functionary's office - it is the bricks and mortar that are American Democracy. And on that day, American Democracy was at its most essential (perhaps just short of election day itself) with the American people's rightfully elected representatives working to certify the latest presidential election.

When the "protesters" stepped into the Capitol Building and went beyond the limits of their lawful time and place for protest, they became a treasonous invading/insurrectionist force. Members of Congress (again, our rightful and democratically elected representatives) were whisked away into hiding for their protection from the invading force. And an election was intentionally disrupted in an attempt to "stop the steal," i.e. to stop the rightfully and legally elected candidate from being certified as President-Elect. That's an attempted coup (it looks like it was probably a "self coup" and its the sort of thing that villains like Chavez, Putin, and Stone are about, but I'll leave that for another comment).

The argument that we must parse these insurrectionists out and treat them as mere trespassers unless they individually did something different ignores the fundamental nature of what happened - they all were there invading the Capitol together, with common cause, and none could have "trespassed" without the collective force of all of them together. The worst offenders needed the "mere trespassers" to create the overwhelming numbers that allowed them to overrun Capitol Police.

Sure, the ones who committed specific acts of violence should be treated more harshly (life sentences?). But if you walked into the Capitol on 1/6 as part of that treasonous mob, you too are part of the treason even if all you did while you were there was walk in and take some selfies. (If you stayed outside and hooted and hollered about "stop the steal," you're an asshole, but your not a criminal).

"But all I did was drive a car," says the bank robbers' get away driver.

As for whether or not police force was used on 1/6 - the police should have opened fire indiscriminately on anyone who walked through the door. The f***ing Capitol was being invaded. What is the matter with you people? Had the invading force been wearing uniforms, maybe it would be easier for some of you to see - but it was the same thing.

You are freaking looney tunes. Seriously. Im not joking. You are straight nuts. What possesed you to have such ridiculous thoughts. The fact loons like you even exist amazes me. Its like you are an undiscovered primitiven species WOW