If you missed the town hall legal meeting because you were streaming Queens Gambit on Netflix (which you should not miss)- then you made a  Mistake. The town hall meeting was much better entertainment then Fox News' STOP THE VOTE STOP THE COUNT IN PENNSYLVANIA AND GEORGIA  BUT NOT WISCONSIN SCREED. You can see all of our minute by minute sui generis thoughts on @Justicebuilding twitter.

Judge Sayfie thinks SOME trial lawyers are mostly bluffers and do not try a case when their hand is called. Sadly, she is right.  In other words, she believes a lot of cases plea out at the last moment. She was not attacking lawyers on either side- just stating a fact. Perhaps the defendant gets cold feet. Or the state has a last minute witness problem. Again, she was not criticizing lawyers. She sincerely believes we need to get back to trying cases. Judge Soto noted half the Florida counties have had multiple criminal trials-  and we do not care. Half the country voted for an idiot named Trump. What other counties do in this State is meaningless to us.

In one of the jaw-dropping comments of the evening, when Judge Soto was asked why Miami Dade state court is trying cases when the Feds are not until April, 2021, she basically trashed the feds, implying that while we do not have the funds they have, we have more cases and we try more cases and we care more about our cases then the feds do. This is OUR recollection of her statements, and she is free to deny it but we say WELL SAID JUDGE SOTO

In the other stop-the presses moment, your PD Carlos Martinez said that PD trial lawyers have to go to court to try their cases. He said PD lawyers are NOT fungible. That lawyers are not interchangeable. We agree.  And that if a PD is afraid to go to court, they cannot do their job. He was asked if that meant they would be fired, and without saying the "F" word, he reiterated that PDs must be in court to try their cases if required.

We asked several questions in the chat room. Some about aerosol transmission were asked and answered. Others were not. For example when we accused a certain Judge of being on the Zoom and not wearing pants, the moderator would not ask the question. We then offered the moderator a $500 Amazon gift card to ask Judge Sayfie if she would rather have Covid or have dinner with a notorious ASA whose last name rhymes with "Green". You figure it out. The question remains unasked and unanswered.

We think Abe Laeser was on the meeting and asked about being over the age of 70 and being forced to go to court.

The real problem with many of questions is this- they assume specific unique facts and then interpose them as a reason to not try. For example, a question was asked about a witness getting covid during the trial. We applaud Judge Sayfie for responding that you do what you would normally do if a witness got sick during a trial- delay it, resolve it, or have a mistrial.

The meeting went almost as long as the vote count in North Carolina and mercifully ended at 7:30 when Zoom pulled the plug just as we were taking off our Rumpole mask to reveal ourselves to the world. Well, another time perhaps. 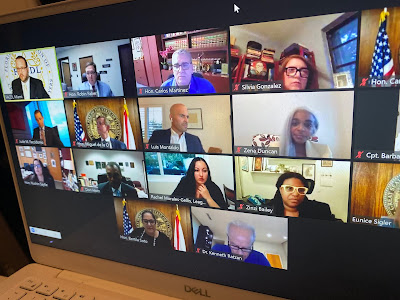 YOUR TOWN HALL IN ACTION

300 People attending because we promoted it.

BREAKING THE TOWN HALL ZOOM CHAT HAS BEEN....TRUMP-LIKE DISABLED. TRUMP WANTS TO STOP THE COUNT AND CERTAIN PEOPLE WANT TO STOP THE CHAT (or at least Rumpole from chatting). So now we will have to sit quietly in a corner like a good little blogger.

FACDL HOW MANY CHATS DID YOU DISABLE TODAY?

The US is about to explode over a contested election

And that is why your Miami Eleventh Judicial Circuit wants to have a friendly chat today at 5:30 about restarting Jury Trials.

Timing is everything in life.

Rumpole will be present ...maybe.

Let me save you time and effort, there will be no jury trials for a long time

All those parties to say there will not be jury trials for a while? Like a "How many doe sit take to screw in a light bulb ?" scenario.

What is the constitutional underpinning that justifies this continued suspension of due process and speedy trial? Maybe one of you wise lawyers reading this blog can fill me in.

Trivia for extra credit: how long is the longest that due process and speedy trial have suspended in any jurisdiction in the United States and what was the basis of it?

You might want to read this before answering: https://www.scribd.com/document/480224096/98-Order-Dismissing-Charges-With-Prejudice

Is this a public forum for stakeholders and the public able to attend and ask quesitons?

Juvenile public defenders are required to be physically present in court with their clients and families for bench trials. All other attorneys appearing from Zoom. State and their witnesses are safe at home. Why is no one talking about how trials have started in juvenile courts? Why is no one talking about how KFR cares about the safety of her lawyers but CM has his lawyers on the front lines?

An individual who worked in the locations and on the dates listed below has tested positive for COVID-19.

Persons identified as having been in close proximity to the confirmed individual are being notified and will be asked to take all necessary precautions.


Persons who were in these locations recently should follow self-monitoring steps for the next 14 days as outlined in the Centers for Disease Control website at:

Rump - your comment please on Biden's first act as the presumptive President-Elect. He just spoke to the country and stated that, if he goes on to win, it will be the 4th time in US history that a sitting President lost re-election. Ah, someone needs to provide him with better research so he doesn't look and sound that ill-informed.

I regret to inform you that Pat Trese passed away today at the age of 50. He was a wonderful lawyer of unimpeachable integrity devoted to his wife and 3 children. He was a kind and patient man who fought as hard as he could for each of his clients. He genuinely cared for them and their families. And he got them great results. His goodness was inspiring. He will be mourned by everyone who knew him. A real class act.

You great at the town hall tonight Sir Rumpole.

RIP Pat Trese. Definitely one of the nicest guys I knew at the REG

the pd talked about firing his people on a public zoom? wow.

I think Biden said it had only happened four times in the last 100 years, which is consistent with the facts cited.

Captain rushing with his hot take and mangles it per usual

Imagine waking up as a PD this morning with your 100+ caseload, no available trainer, meager paycheck, and difficult ASAs/judges knowing that your boss went on a public forum last night and said that you will be fired if you don't go into the Covid-Courthouse.... As a former PD, that was disgusting to witness. PDs are dropping like flies and I can imagine that after last night's threat, even more will leave. Wonder if he would have made such a public threat if it was an election year?

And Captain, Ford did not lose "re-election" to Carter. Ford had not been elected in the first place.

I want to piggy-back on what you said. As another former PD it was especially tough to hear. I feel for my former colleagues who now have to chose between now money and health vs. remaining at a job they love. I expect many more will leave.

At a minimum if Carlos expects young lawyers to put their health and lives at risk he better knuckle down, take a C caseload, and start trying cases along with them. I expect the same from the rest of the administration.

As for the judges, excluding a few, we know that your motives for resuming jury trials involve reducing your dockets not providing due process to those you have kept incarcerated during this pandemic and closure to the victims of crimes.

I urge everyone to act with reason and follow the Southern District of Florida's lead. Cases can be worked up, motions and evidentiary hearings can be litigated, and everyone can get to trying cases again once its safe.

I found the admission that none of the infectious disease experts have seen the inside of REG telling. The Wilkie Federal Courthouse and new Miami Juvenile building could maybe accommodate social distancing to a degree, but I remember day 1 in Miami criminal court the top advice was to never touch the escalator handrails...and obviously that was before the current plague. The logistics and coordination required for a jury trial do not mesh with a deadly airborne virus. The money that it will cost to choreograph all this would be better spent on expansion of lockdown house arrest for more inmates since the pressure of trying cases for in-custody defendants seems to be the thing driving this monumentally stupid exercise.

What is the constitutional underpinning that justifies continued suspension of due process and speedy trial?

Don't tell me "it's a bad idea" or "it's wrong" or "it's contrary to the science." Maybe some or all of those are true. Instead, think like a lawyer. Is it legal? What is the standard? Who bears the burden?

You might want to read this before answering: https://www.scribd.com/document/480224096/98-Order-Dismissing-Charges-With-Prejudice

LOL "due process" has not been "suspended." And if a person wants a speedy trial, they should ask. My guess is defendants are worried about the jury pool and inability to prepare with their lawyers. Who are you to try to force others to go to trial under these circumstances. Think like a lawyer indeed.

Everyone needs to pay attention to the Eleventh Judicial Self Monitoring alerts. The majority of alerts that someone has tested positive for Covid 19 are coming from REG. Why is this being overlooked in conversations about restarting jury trials? Our numbers in Miami-Dade and Florida are going up not down. So why the push? Why ignore the numbers and force people to risk their lives and those of their families. If any lawyer, judge or client tests positive it doesn't affect just them. It affects every individual they come in contact with once they leave the courthouse. Will trials become the new superspreader events? I want to see who is going to line up to take responsibility the first time a lawyer forced to try a case under these conditions and gets Covid-19. Or will we simply be told by the powers that be that its the price of doing business in the legal profession. Docket numbers be damned! People need to be able to survive this pandemic. There is no honor in saying someone died trying a case just because a judge was in a hurry to lower the number of cases in their division. Here's an idea: Any judge who forces lawyers to try a case in the middle of this pandemic in person should be prepared to be on every social media platform and own the responsibility if any should get sick.