FLORIDA SUPREME COURT UPDATE: High noon has come and gone and no new Justice for the Tallahassee Eight. So Our own Captain called the Governor and his press office said this:

As the song goes, "Rainy days and Mondays always get me down." Add to that a pandemic, a large part of the American West going up in flames, and multiple active tropical systems in the North Atlantic and Caribbean Seas.  If you are looking for a cheer-me-up- click on over to Mr. Markus's blog where perhaps they are discussing Judge Lagoa's chance to be the only judge to actively serve simultaneously as a a Justice on the Florida and US Supreme Courts.

Israel has so mishandled the pandemic that it is now going back to a full-shutdown as orthodox religious groups who have stores that do big business in the run-up to the high-holiday season threaten to ignore the government's order. In other words- civil unrest.

Florida races to phase two openings in counties and court systems. We will have more to say in a later post this week on why pandemics, like recalcitrant two-year-olds, ignore rules. Suffice to say that when over 3,000 Floridians a day are still getting infected is no time to open bars and indoor dinning-even at 50% capacity.

GLOBAL WARMING IS A FRAUD

The best way to deal with science that you do not like is to ignore it. The US has shown that over the last twenty years. Remember the applause and wild ecstasy the phrase "drill baby drill" caused ten years ago? Recall the current administration's withdrawal from the Paris Climate Agreement. The agreement was nothing more than a European plan to thwart American Exceptionalism. Americans - unlike any other people on earth- were given by the God himself the right to drive large pick-up trucks and SUVs. God ordained the burning of coal, otherwise he wouldn't have put so much of it in West Virginia and Pennsylvania. Right?

There is nothing more American than getting out of a coal mine shift, driving to 7-11 for a big gulp of diet soda before heading home to eat some fried chicken and watch football on Saturday and Sunday. This is what allowed our boys to storm the beaches of Normandy in June 1944. It wasn't some silly European concept like science or education. Such things did not allow Dr. Salk to invent the polio vaccine. It was big cars, big soda, big servings of greasy food and Football. Baseball. Hot dogs. Apple Pie and Chevrolet.

And now we are paying the price for ignoring science as people in San Francisco awake to dystopian scenes of orange days. Fires surround Portland, Oregon. Thousands of people have lost their homes. Hundreds are dead. Has any one considered whether the farms of  California can continue to feed the country? Whether the fires have so upset the ecological balance of bees, birds, rain, sun, trees and soil that once the dust clears the farms will no longer produce food?  "Drill baby drill".

This, dear readers, is fake news: 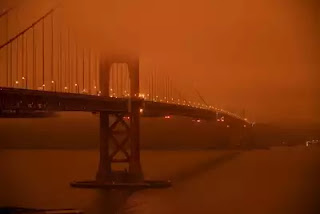 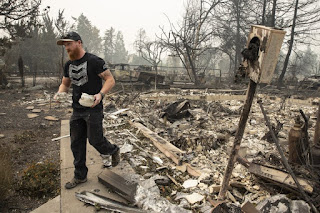 The Paris Climate accord will not stop this. Global warming did not cause this. We did not drill enough. Because Americans are exceptional, right? Science does not apply to us. Education at liberal colleges is part of the deep state that causes these problems.

Covid-19 isn't a pandemic. It is nothing to be afraid of. It will "disappear like a miracle" because there is no reason to listen to doctors and scientists who trained their whole lives for this event. Science and technology did not allow the United States to be the only country to land a man on the moon. American exceptionalism did. The belief that we are better and different and entitled because our fathers and grandfathers and great grand fathers bravely fought at places like Belleau Wood, The Ardennes Forrest, The Chosin reservoir, and Khe Sanh. The fact that Buzz Aldrin had -in 1963 while a major in the US Air Force- earned a doctorate from MIT in Orbital Mechanics for his thesis on "line of sight guidance for manned orbital rendezvous"  had nothing to do with the success of the first moon landing. Right?

Of course we are being sarcastic. We are paying the price and will continue to pay the price for ignoring science. But what is even worse is the 35-40% of Americans who believe what we wrote. That Harvard, and MIT and the University of Chicago and Stanford are not the backbones of a great University system whose leaders can help cool the planet and find a vaccine for Covid-19. That Americans do not succeed because we are innovative and educated. That Americans succeed because they are simply entitled to succeed because of some brave act our ancestors performed on foreign battlefields 60, 80, or a hundred years ago (do any of our readers even understand what occurred at Belleau Wood? Did anyone bother to talk to Sy Gaer about the fighting at the Chosin Reservoir? Much the shame for that.)

We should be rightfully proud of what our soldiers did in the wars we allude to. But the fallacy in the American Exceptionalism /Greatest Generation argument that those who hate scientists and doctors miss, is that the boys who picked up a rifle and held a line in a Belgium Forrest  or Korea or stormed a French Beach did so because they believed that they were preserving a country that promised a better life to their children through freedom, science and education- the very values those who support our current president despise.

We are 50 days away from a Presidential Election that may well tear the country apart. Far from being the beacon of democracy, we may turn into a backwater dictatorship where votes are discounted and the will of the people thwarted by jack-booted thugs who march in support of their dictator while the Country burns from riots and Santa Ana winds.

Posted by Rumpole at 8:21 AM
Email ThisBlogThis!Share to TwitterShare to FacebookShare to Pinterest

Global warming is real. It is destroying Western Civilization as we know it. If we can take emergency action to stop COVID, we can deal with global warming TODAY! Here is what needs to be done immediately.
1. decrease industrial production by 50%
2. place a limit on the number of children every woman in America can have. I say 2. China has similar restrictions and they are working.
3. if we have mandatory masks, we can have a mandatory vegetarian diet for every American. The processing of meat causes more CO2 into the air than automobiles.
4. place quotas on the number of cars each family can own and the number of miles they can drive a week. $10 for each mile over the quota. Think about how much less pollution we will have.
5. Only hospitals and nursing homes will be allowed to have AC. Our economy grew by leaps and bounds 100 years ago without AC. We can do it again.
A President Biden should declare a national emergency to reverse this existential crisis.

Are you off your meds?

No Mom- I'm taking them as prescribed. Thanks for caring.

8:50 Am - such nonsense- drill baby drill. MAGA no fires at all. Fake news. No storms in the atlantic fake news. Fire Faucci! The virus will disappear. Comeon man- get with it. Science sucks- fake news. Deep state. Not real.

Gravity is just a theory.

1pm and I am awaiting a call from the Governor. I am willing to serve if asked. I have the experience and the title as circuit court judge to fulfill the obligations plus I am a member of the bar for more than ten years so lets rock this!

Rump, where's the announcement from the Supreme Court on the new Justice pick? DeSantis was supposed to do it by noon. What gives?

Rump, there is a law in West Va, Pa., and Ohio, that forbids the consumption of diet sodas with a 20 mile radius of a coal mine. The preferred liquid lunch is Jack Daniels with Mountain Dew or if you must, RC Cola. You need to re-watch The Deer Hunter to familiarize yourself with the cultural norms of the area.

Supreme Court has issued the mandamus.

Pretty much all you need to know in about 8 minutes.