NORTH OF THE BORDER .... THE RACE FOR STATE ATTORNEY

DISGUSTING, INFLAMMATORY, DISHONORABLE, CHEAP SHOT, DISRESPECTFUL, RECKLESS,  .....
are just some of the words that come to mind as I write this Blog post.

The race to replace Mike Satz, who has been the elected State Attorney in Broward County for more than 43 years, just got dirty. And the lowest form of dirt, a PAC supporting a candidate named Sarahnell Murphy just went there. You know where there is. We have seen it before. A long time ago we saw it in Miami-Dade County once or twice; (who can name the candidates).

Ms. Murphy you see is a career prosecutor. And if you have ever had the displeasure of dealing with her, you know how she feels about criminal defense attorneys.

So, let me tell you something about one of the eight Democratic party candidates running against Ms. Murphy to replace Mr. Satz.

He has been an attorney in Broward County for 14 years. He began his career as an Assistant Public Defender where he worked for two years. For the past 12 years he has been in private practice primarily as a criminal defense attorney; he also defends matters in front of the Florida Bar. He is married and has two daughters, ages 7 and 3. He has also performed volunteer work with the Broward County Substance Abuse Advisory Board, the Broward County Bar Association’s County-Municipal Affairs Committee, a Florida Bar Grievance Committee, and the Broward County League of Cities, among other organizations. In 2015, he won a seat on the Coconut Creek City Commission where he has served for the past five years and he is currently their Vice-Mayor.

But, according to the mailer* supporting Ms. Murphy, here is what it had to say about her opponent:

"Wife beaters, stalkers, armed robbers and more ..... Josh Rydell has worked for them all - trying to get them reduced sentences or even no jail time. Even perpetrators who prayed on the elderly committing lewd and lascivious acts" ..... "Did you ever think about the victims, Josh?" "Tell Josh Rydell we want a state attorney who cares more about getting justice for the victims of crime than protecting the criminals who break the law." 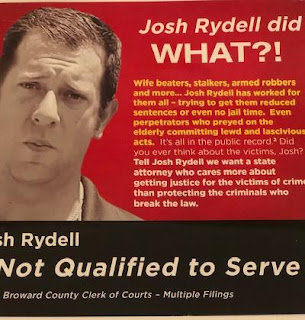 The opposite side of the Mailer promotes Sarahnell Murphy, A proven leader, for State Attorney. 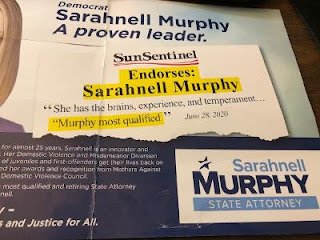 Ms. Murphy has made no attempt to disavow herself from the PAC "Victims Have Rights" or to denounce the content of this disgusting, inflammatory mailer.  Of note, the PAC has only two major contributors: a total of $110,000 was donated by a company named I-Payout which has been tied to Ponzi schemes; and a $10,000 contribution was received, from, the candidate herself, Ms. Murphy.  (See Red Broward's story here).

Ms. Murphy just last week was given the opportunity to denounce the content of the mailer. She did not do so. The Dolphin Democrat conducted a 33 minute interview of the candidate which can be viewed by going here ; go to the 26th minute to hear the question about the mailer and her response.

Sarahnell Murphy - if you do not completely disavow the mailer and denounce its contents then you do not deserve the trust of the citizens of Broward County for you to hold the office of State Attorney - maybe dog catcher - nah not even that.

Sarahnell Murphy - not disavowing the mailer lets the voters know that you do not have any respect for the 6th Amendment to the United States Constitution, guaranteeing "the Assistance of Counsel" for the defense of anyone accused of violating the law.

Sarahnell Murphy - not disavowing the mailer and denouncing its contents lets the voters know that you do not have respect for the history of our State of Florida in establishing the right to a Public Defender. Have you ever heard of Clarence Gideon - clearly you skipped that course in law school. Thank goodness Clarence Gideon did not have to appear opposite you in 1963 and instead, he wrote a five page petition for writ of cert to the highest court in our land, the United States Supreme Court, which ultimately handed down the decision of Gideon v. Wainwright, holding that a criminal defendant who cannot afford to hire a lawyer must be provided one at no cost.

Clearly, Ms. Murphy, you must not be familiar with the name Greg Lerman, a criminal defense attorney practicing in Palm Beach County who ran for County Court Judge against Dana Santino. Ms. Santino pulled the same crap as you just did with your PAC supporting mailer disparaging Rydell.  Here is just a sample of what Santino's campaign was responsible for saying: "The Truth About Gregg Lerman.’ The headline banner of this page proclaimed that, “Attorney Gregg Lerman has made a lot of money trying to free Palm Beach County’s worst criminals. Now he’s running for judge!” Below that, a photograph of Mr. Lerman was surrounded by the words, “CHILD PORNOGRAPHY,” “DRUG TRAFFICKING,” “MURDER[,]” “Identity Theft,” “RAPE,” “Sexual Assault,” “Internet Solicitation of Minors,” and “PEDOPHILES.” [emphasis used in original]."

Santino, unfortunately, was elected to the bench in 2016. Fortunately, the Florida Supreme Court booted her off the bench in 2018 after the JQC recommended she be removed finding Santino unfit for the job and lacking impartiality because of her election bid smear against her opponent Gregg Lerman and his criminal defense practice. (See Sun Sentinel story here and the Florida Supreme Court's opinion removing Santino here where the court concluded: "Simply stated, Santino’s conduct does not evidence a present fitness to hold judicial office. It is “difficult to allow one guilty of such egregious conduct to retain the benefits of those violations and remain in office.” ..... "We refuse to endorse a “win-at-all-costs-and-pay-the-fine-later” strategy, especially in light of our past warnings and stated intolerance for the kinds of campaign violations at issue here.")

The only thing you deserve, Sarahnell Murphy, is a Bar investigation to determine whether this campaign literature disqualifies you from holding the office you seek.

NOTE: This Blog post is not an endorsement of Josh Rydell. There are seven candidates running against Ms. Murphy. They include:

*HT - to the anonymous person who emailed us photos of the mailer.

I don’t like her either, but she’s not running for judge. I think it’s fair game to point out the representation history of someone running to be the chief prosecutor, especially when that person has never prosecuted a case in his life.

Maybe "Jimmy" Stewart, Pryor and Rydell could morph into a single candidate for the sake of electoral efficiency: a black guy with an "aw shucks" demeanor singing the Cha Cha Cha during each campaign speech.

3. My dealings with Saranell Murphy have always been pretty professional but a condemnation of the 6th Amendment should trigger a disqualification to serve

3. My dealings with Saranell Murphy have always been pretty professional but a condemnation of the 6th Amendment should trigger a disqualification to serve

I am surprised by this. I have worked with Sarahnell over and over and she has the utmost respect for defense lawyers. I have never seen her mistreat one.

We did a DUI ethics seminar with her as a speaker. She got the largest applause of anyone and most in the audience were defense lawyers.

A guy named Mike Samuels did that kind of ad when he ran against then judge Kevin Emas. He said Kevin "represented the bad guys." Samuels won. Emas was reappointed and now is chief judge of the 3rd DCA and is very state oriented.

I will call Sarahnell and demand she take that down and apologize.

Shouldn't her conduct be a topic for the Florida Bar? I can understand a hard fought campaign but these tactics are outrageous.

Didn't Michael Samuels do that--successfully, most unfortunately--when he ran against Kevin Emas many years ago?

You failed to mention that Saranell’s husband is a criminal defense attorney in Broward for many years. So she is perfectly fine living off someone who defends murderers and rapists—what a hypocrite.

I have known Josh Rydell for over twenty years. Apart from being a great lawyer and former Assistant Public Defender he is an all around great guy. A perfunctory look at his platform reveals he’s bringing a humane approach to such issues as drug addiction, mental health and racial inequality. Plus, you gotta love a guy from Buffalo!

Santino and Lerman were running for County Court seat.

Sarah Nell has been married to a criminal defense lawyer for years. How about that.

I’m a Broward resident and got that disgusting mailer. I immediately fired off an email to that dirtbag Sarahnell Murphy about her appalling and disgraceful ad. I doubt it will do any good since tomorrow is Election Day but I couldn’t let it go by without her knowing what apiece of crap she is.

I support Teresa Williams. Wish I lived in Broward so I could vote for her!

I don't know, I kind of want to know what type of record the guy has. What if he represented cops in 1983 actions or the sons of the Confederacy to keep the Confederate flag up? Seems to me that would be relevant or worth knowing.

The commentary isn't fair, but listing his past work is fair.

We corrected the error. Thank you. Cap

Murphy was straight out Asked about the mailer and its what it said. Her husband is a criminal defense lawyer. I listened to her answer. She punted. She could have said

I respect the sixth amendment to the US Constitution and our system of justice that permits every defendant charged with a crime a competent and qualified defense attorney.

No. Instead she said nothing. Not one word denouncing those shocking words. She is the person who will carry the most powerful position in the county. She can decide whether to formally charge someone with a crime. Take away their freedom. We deserve better.

Even Joe Klock would agree with that.

Well, neither Murphy nor Rydell got it.