UPDATE: As first reported on @Davidovalle305 Officer Jonathan Aledda was convicted Monday evening of the misdemeanor of culpable negligence and aquitted of all other felonies in the re-trial of the shooting and death of an autistic man. The first trial ended in a hung jury. Reid Ruben and Don Horn for the prosecution and Jay Kolsky and Doug Hartman for the defense. We blogged about the first trial here.
https://justicebuilding.blogspot.com/2019/03/state-v-officer-aledda.html
Judge Alan Fine presided over both trials.

The NACDL's motto is "Liberty's last Champion".
Criminal defense attorneys defend the un-defendable. Before they get to our client they have to get though us. We honor attorneys with the John Adams award named after our second president who, as an attorney, represented British Soldiers who fired into a crowd in Boston.

We defend people charged with unspeakable crimes.
One of our brethern stepped into the breach in 1996 and represented Richard Jewel who was accused by the FBI of planting the bomb at the 1996 summer olympics in Atlanta. Jewel fit the classic profile of a bomber. A loner, estranged, and a classic under-achiever. The world recoiled at Jewel's cowardly act. He was universally reviled and condemend. And he was innocent. As the FBI later admitted, Eric Rudolph, an abortion opponent, was the bomber.

Much of what we do involves a system rife with racial bias. From police officers who stop and arrest (and sometimes shoot and kill) young black men who have done nothing wrong, to prosecutors who still systemically exclude African Americans from jury service, racism still stains our system of "justice". We are not so far removed from a time when a small heroic band of lawyers like Thurgood Marshall raced around the South defending  African Americans in small towns where trials were shams.

So what do we do about this? 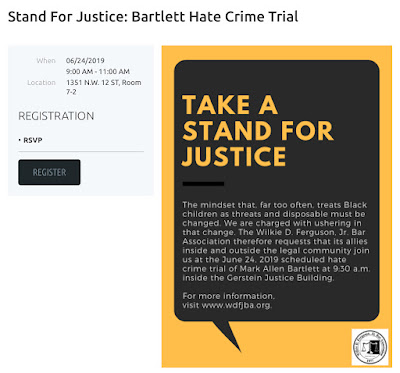 Posted by Rumpole at 12:30 AM
Email ThisBlogThis!Share to TwitterShare to FacebookShare to Pinterest
Labels: Officer Aledda

The Constitution’s double jeopardy clause guarantees that no one shall “be twice put in jeopardy” “for the same offence.” Today the Supreme Court upheld a longstanding interpretation of that clause, known as the “separate sovereigns” doctrine. By a vote of 7-2, the justices rejected a challenge to the doctrine by an Alabama man who argued that he could not be prosecuted for both federal and state gun charges arising from the same traffic stop.

Justice Samuel Alito wrote the majority opinion, which was joined by Chief Justice John Roberts and Justices Clarence Thomas, Stephen Breyer, Sonia Sotomayor, Elena Kagan and Brett Kavanaugh. Alito began by explaining that the “separate sovereigns” doctrine is not an exception to the double jeopardy clause at all, but instead is part and parcel of the clause itself because the clause bars successive prosecutions for the same offense – not for the same conduct. Offenses, Alito continued, are defined by laws, which are in turn defined by sovereigns. “So where there are two sovereigns,” Alito concluded, “there are two laws,” and therefore two offenses.

Alito wrote that the defendant in this case must overcome principles of stare decisis – the idea that courts should not overrule their earlier decisions unless there is a very good reason to do so. Alito wrote, after reviewing early cases and treatises in some detail, about the defendant's inability to do so with enough force to break of chain of precedent linking dozens of cases over 170 years.

Ginsburg and Gorsuch in the Dissent.

Gorsuch was significantly more critical of the majority’s opinion on stare decisis. Gorsuch acknowledged the need to “pay heed to the considered views of those who have come before us, especially in those cases,” but he emphasized that “stare decisis isn’t supposed to be the art of being methodically ignorant of what everyone knows.” “Indeed,” Gorsuch continued, “”blind obedience to stare decisis would leave this Court still abiding grotesque errors like” the Supreme Court’s 1857 decision holding that blacks were not citizens and could not bring a lawsuit in U.S. courts or its 1944 decision upholding the internment of Japanese-Americans during World War II.

Gorsuch closed his dissent by contending that when “governments may unleash all their might in multiple prosecutions against an individual, exhausting themselves only when those who hold the reins of power are content with the result, it is the poor and the weak, and the unpopular and controversial who suffer first—and there is nothing to stop them from being the last.”

Why the silencio on President Suskauer?

Jose Baez is the latest lawyer to fly the Weinstein coop.

The autistic man you referred to in your post is Arnaldo Rios Soto. He is not dead. Nobody died in this case.

Can't we defend the individual without defending the crime?
And what if Justice in this case is a Not Guilty verdict for this defendant.
I hate when people always talk about wanting 'justice" when what they want is a guilty conviction.

Hey Rump. I am troubled by Don Horn's comment that he thought the verdict was fair? What say you?

5:59:00 PM - why are you troubled by Horn saying he thought the outcome was fair? What could possibly be wrong with that.

Not 5:59 here, but also troubled by that comment.
If he thought it was fair then why would he have pursued the the felony charges?
Isn't that implying that if he were convicted of the felony charges (that Horn was pursuing) the verdict would not have been fair?

What is Horn supposed to do - criticize the verdict? He can't do that. Some people just look for a reason to complain.

7:16, He can say that he thought there was enough evidence to convict on the felony charge as well even if the jury didn't see it.
To say that it was fair that they dismissed the felony means they probably shouldn't have brought it in first place.