There is no pleasure when a hard working and respected jurist makes a mistake and catches a public Supreme Court reprimand. The Herald article on Judge Maria Ortiz admitting that she failed to report free hotel rooms and trips, including a "congo-bongo" trip is here.  Her husband is facing criminal charges for the freebies.


Have you ever seen a public judicial reprimand? The Judge is called before the Supreme Court and basically they just yell at her for five minutes. It's a bizarre punishment. Like a modern day shaming.

Meanwhile, are you wondering which former REGJB judge who quickly scurried out of the Justice Building to delinquency court is now going to resign in the face of a noxious complaint about using racial epithets in course of his work-day is?
Just wait a little longer until he waves the white flag and quits.
This is someone who needs a good shaming.

Santeria is alive and well outside the REGJB. The chicken, however, is dead. 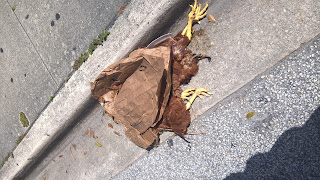 From occupied America....for shame for shame!

Do you have to stop blogging bc of the Woodward election?

In the last two weeks I identified over 34 comments about Jackie Woodward and less than three about Betsy Zane-Alvarez. I find that EXTREMELY SUSPICOUS
WHat say you rumpoloum?

Hell, consider this- over the last month there are ZERO comments that Rumpole has allowed over judge Julie Carnes of the 11th circuit and Justice Sotomayor. Now what could THAT be all about? This mystery deepens.

PS I'm offended I have to prove I'm not a robot. Why can't robots be forced to prove they aren't human? This sucks

Andrew Boros, are you kidding? Other than red peppers and green peppers, what the heck else is there out there for retirement life? Miami is the best city in the world. You had it all - and you gave it up??