ONCE MORE INTO THE BREACH 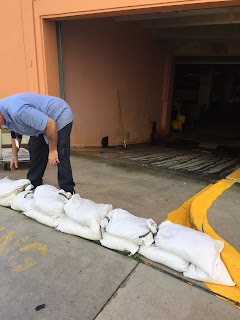 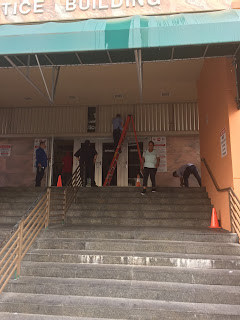 In photo 2 above, we watch as workers install hurricane shutters and wonder about the over/under on how long the awning lasts and where it ends up?

Instructions: Take the ice and put it in the cooler with the vodka and juice and grapes. Move the food to higher ground in your house.
Take the legal books and slowly rip out a page at a time and toss on the floor for your cat to chase.

We often get questions when these disasters threaten us. Here is one: "Rumpole, please explain the difference between a hurricane watch and a hurricane warning and what I should do?"

Rumpole: This is a common question, especially among new lawyers from Kansas and Oklahoma who don't know from hurricanes.

A hurricane watch means that weather ...wait...first you need to know that normal barometric pressure is around 1013 millibars, except in Broward where is it often more, or less.

As a storm approaches, the barometric pressure drops on an inverse curve to the distance in kilometers minus, of course the drag coefficient of the current of the Gulfstream. Duh. This is often called Bernoulli's Equation. So, a hurricane watch means that it could rain a lot in the next 48 hours.

However a hurricane warning means that it is raining, that the drag coefficient of the Gulfstream is less than minus 1 Celsius, and tropical storm winds may be present soon.

If all of this sounds complicated, it really isn't. Check Rumpole's  list. When Channel 7 WSVN, designated by President Rutherford B. Hayes as "Your Hurricane Station"  issues a Hurricane Watch, pour one shot of vodka into a cold cup with some ice and OJ. Place the rest of the vodka and juice in the cooler. Drink and repeat. By the third drink, Bernoulli's Equation and the differences between the hurricane watch and hurricane warning will not be any clearer, but you won't care.

CLOSINGS TOMORROW:
Most Bowling lanes.
The PIP Seminar at Joes Take-Away entitled "PIP-How to bang those insurance companies for fees now more than ever."
Court is open Wednesday, but closed Thursday except in Broward where court will be closed Wednesday, but open Thursday. (*)
All Christian Science Reading Rooms (not because of the storm, but because no one goes there anymore).

See you in court. Stay Dry, and watch this blog for your exclusive end of civilization coverage of "Matthew- Killer Storm 2016."


* None of this is true as far as we know, but it's a great rumor.
Posted by Rumpole at 6:55 PM
Email ThisBlogThis!Share to TwitterShare to FacebookShare to Pinterest
Labels: Hurricane Matthew

Where did you hear about broward? I have a calendar call in the a.m. but haven't found any closure info. My first post ever, so make it worth my while.

Read the red part after the info.....

All hearings are cancelled in Broward for tomorrow.

2:25 PM. You are partially incorrect.

David Kotler's hearing is specially set and will be heard tomorrow by Judge Dale Ross who has offered to come out of retirement just to hear this case.

RUMPOLE ... can you let us know who won and who lost in the suicide pool for this week? Who is left?

ALERT: Don't forget to watch tonight's debate of the greats on the FOOD CHANNEL tonight at 8pm - ANTHONY BOURDAIN vs. SIR KENNY W ...

Look at the amazing and kind charitable work our own Keith Haymes has been doing for the poor and sick in Haiti for all these years. God bless you a Keith Haymes.

KEITH HAYMES is a champion. He has been doing charity work in Haiti and some of the poorest and sickest countries in the world for many years. He learned to be kind and loving from his philanthropic dad BUDDY HAYMES. He does it the right way. Saving lives without seeking recognition. Do you all remember Keith in the glory days of the Justice Building trying cases with Carol King Guaralnik?

No. No one does. Old guy talking about old guy.

Rump I know no real sex but this smoking hot PD lost power in her Beach condo and is headed to my mini-mansion in the Gables for the weekend. I have five bedrooms, but really we only need...

Kenny W is still alive in the football pool?