Who is this swabby? Why is he running for judge?

Is it ethical to appear in active US Military uniform while running for judge?

Should the official Navy Emblem be on his website? 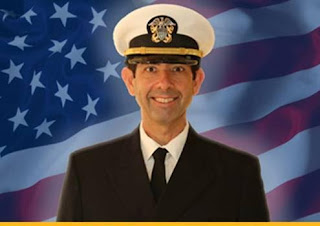 We're sorry and most of our readers are too young to get the references, but when we first saw this, we laughed because the only images it brought up in our mind was Gilligan and McHale's Navy, neither of which are the type of serious thoughts a judicial poster should create.

Avast and see you in court.
Posted by Rumpole at 5:55 AM
Email ThisBlogThis!Share to TwitterShare to FacebookShare to Pinterest
Labels: Gilligan's Island

I was thinking captain Stubing

The Pentagon imposes strict controls on in-uniform photos, and require disclaimers when used, for active duty and for reservists -- but basically not for veterans no longer in service.

The hat seems too big, am I wrong ?

If he wins, he should have to maintain that look when on the bench

I'm sure with your distinguished military career, as just one component of your commitment to public service, you must feel swell mocking this guy's service.

As a lawyer Mr. Blumstein was absent from the jurisdiction for many months at a time, which resulted in extreme delays in his cases. It was very disruptive, but he repeatedly played the military card in order to obtain delays in his cases. It was very troubling that he would use his military status in that manner. Apparently, that practice is frowned upon by the military, yet he did it anyway.

I am very concerned that, if elected, Mr. Blumstein will be similarly absent from the jurisdiction for months at a time, getting paid to pursue his military career, rather than being on the bench full time as required by the canons.

Query: will Kathy prosecute the trigger happy pig who shot the unarmed, laying on his back, hands in air, screaming do not shoot, black therapist?

If he's retired, he can use that pic but, to me he shouldn't.

Who is that guy anyway. Never met him.


You are entitled to your post, but I think you are being unfair.

First, if you go to Mr. Blumstein's website, the photo displayed most prominently as soon as you open the home page is one of him in a suit and tie.

You have to scroll down to the bottom of the page in the left corner to see the photo you depict so prominently in your post.

Second, Mr. Blumstein, (whom I have never met and therefore do not know), is touting his work as a Judge Advocate in the US Navy since 1996 as one of the reasons why he believes he is qualified to become a Judge. While one can decide to agree or disagree with that fact being a positive reason to vote for Blumstein, the fact is that he has traveled all over the world working as a Staff Judge Advocate, International Law Attorney, prosecutor, Defense Attorney, etc for the United States Navy.

He also is still active (in the reserves).

Please note that this is not an endorsement of Mr. Blumstein. There are four candidates running for the open seat and I have made it a practice to not issue endorsements while writing for this Blog.

I agree that Blumstein's Navy career is a positive. Very much so. But hey, it's almost August. The temps are 90+, the humidity is unbearable. A little levity is what is needed.

Just another guy who has no private practice, jury trial experience and needs a steady paycheck and benefits. That makes him well qualified to be one of our judges.

Captain- this is his judicial poster picture which is all over dade county, including across the street from the REGJB parking lot. Everyone who has been in court this last month has seen it.

Just sit right back and you'll hear a tale, a tale of a fateful trip. It started out as a pleasure cruise with a three hour tour. A three hour tour. The weather started getting rough, the tiny ship was tossed, if not for the courage of the crew, the Minnow would be lost.
The ship struck down on the shores of this deserted desert isle...there was Gillian, the skipper to, the millionaire and his wife. The professor, Mary Ann and Blumstein, here on Gilligan's Isle!!!!

Read about Judge Miller disqualification and Canon violations in the updated story.
I rather the Captain any day.

If you'd have interviewed Blumstein before attacking him with unwitty sarcasm, your post might be taken seriously.

Cap, no disrespect to his service, but he's in violation of DoD directive 1344.10 paragraph 4.3. Use of a photo in military uniform "must be accompanied by a prominent and clearly displayed disclaimer that neither the military information nor photographs imply endorsement" by the DoD or Navy. Additionally, the uniform photo may not be the primary graphic. Applies to reserve members. He wants to be a judge but can't follow the rules? Great. Looking forward to another judge who can't follow the law.

From the political tips website "While military law doesn’t explicitly forbid active military members from using a picture of themselves in uniform on political campaign ads, the Pentagon does require that the ads have “prominent and clearly displayed disclaimers that neither the military information nor photographs imply endorsement by the Department of Defense or their particular Military Department.”

Additionally, the directive also prohibits images of candidates “in uniform as the primary graphic representation” in campaign material."

Did anyone see a disclaimer on the big sign by the MJB? And what about local political rules?

That north Miami cop is a complete moron, incapable of making split second decisions and at terrible shot.

Worse than his actions are John riveras horrible attempt at a cover up. You'd think someone who spent his career lying for and covering up for police could do better on this one

The Miami Dade judiciary is a joke.

His new palm cards have trademarked protected logos as well.

The question of who is or is not qualified (either academically or temperamentally) to sit as a judge is also reactionary.

In light of that I think that it would be an interesting exercise for this blog to ask the following question to its viewers:

"Based on your experience, who would you like to become a judge?"

I would be interested to read the feedback you receive.