Longtime and careful readers of the blog know that we are Anglophiles. From our days on the pitch at Eton, to our love of anything British, our admiration for our British cousins, separated from us by a common language, knows no bounds.

1600 names have been nominated and voted on.
In third place is famous British naturalist David Attenborough. In second place is Antarctic explorer Henry Worsely.

But if voting were to close today, the British Public has picked

RRS Boaty McBoatface as the winner for the name of the ship for this serious mission.

We are not amused. 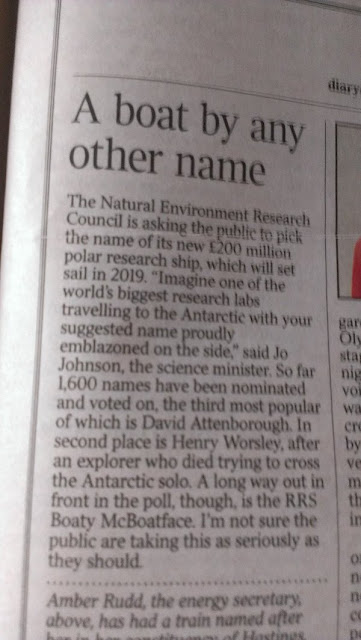 Posted by Rumpole at 8:51 PM
Email ThisBlogThis!Share to TwitterShare to FacebookShare to Pinterest

Don't call what your wearing an outfit, don't ever say your car is broke
Don't worry about losing your accent, a southern man tells better jokes
Have fun, stay clear of the needle, call home on your sister's birthday
Don't tell them you're bigger than Jesus, don't give it away

If you are such an Anglophile how come you never write about the English Premier League, the most important thing the UK exports around the world?

The article doesn't say if there were any qualifications for voting. It looks as though only Trump supporters were allowed to vote.

Not JAFI much longer said...

Another DBT fan, in Miami? I feared I was the only one.

11:52, with apologies to Jason Isbell