Some things are a little more important than sports.

Like friendship; courage; integrity. And Tony Nathan, Judge Ed Newman's bailiff has those attributes as this story about him and his friendship with his old teammate demonstrates.

The Miami Herald article is here. 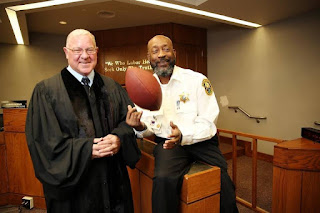 During Nathan’s childhood, the Old South gave grudging way to the New South. He was a boy when Birmingham police turned dogs and fire hoses on student protesters, when Martin Luther King Jr. was jailed for leading sit-ins at lunch counters, when Gov. George Wallace proclaimed “segregation now, segregation tomorrow, segregation forever” and blocked a doorway at the University of Alabama where two black students were trying to enroll.
“Village Creek was the border separating my black neighborhood from a white neighborhood, and if the white kids caught the black kids swimming in their side of the creek, they’d throw rocks at them, and vice versa,” Nathan said. “Birmingham was at the center of the civil rights struggle, but my parents tried to shield us from the ugliness. When we were faced with racism, they were very strict about making us follow the Golden Rule..
“Though I hadn’t set out to be a superstar and still didn’t have that as a life goal, I now felt a new purpose — even a calling — in my role as running back on the Woodlawn High football team, and as part of the healing of the racial tension in our city,” Nathan wrote.
Nathan led Woodlawn on an 11-game winning streak.
“He was like one of the Beatles in football-crazed Alabama,” Greene said. “He wore a tearaway jersey and at the end of games it looked like he’d been ripped to shreds. Spectators would ask him for a piece of it. But even with all that attention he had a coolness about him. He was genuinely modest.
“It was a supernatural time. We’d look in the stands and see whites and blacks hugging each other. We even got two black cheerleaders. Our spirit of brotherhood was spreading.”
In 1974, Woodlawn and Banks High kept winning, putting them on a collision course. Only the winner of their game could advance to the state playoffs.
Gerelds’ son Todd, author of Woodlawn, said what was happening on the football field represented a turning point for Birmingham.
“The desire for change was catching on,” Gerelds said. “Tony was pulled at by blacks who called him an Uncle Tom and whites who didn’t like his stardom. My dad told him he could never please bigots, so be your own man. Tony was a quiet leader who demonstrated trust and love, and students followed his example.”

Rumpole's picks:
Cardinals at Steelers. Could go either way as Pittsburgh west faces Pittsburgh east. But we like the under 45.
Broncos  - 4.5 in Cleveland. The Browns aren't nearly as good as they appeared last week.
49er's +4.5 at home over the Ravens. Love a home dog.
Eagles -3.5 at home over Giants. Ditto.
Tennessee -2.5 at home over the Fins. A coaching change isn't nearly enough.
We'll get the pools up as soon as the plane lands and the car takes us home. It's cold in the northeast.

I want this post down and I want it down NOW. I Have already bought all the Heralds for sale ( its a boon with those machines, just toss in a coupla quarters and grab em all). I'm already working on an injunction on the website. It will be down before midnight.

Know the difference between dumb lawyers, lame bloggers and Kenny and Colby?
Me neither!

Thinking about proposing to my girl. Would ren (a venue) be a good place?

I love COLBY and KENNY!

Best part of this blog!

Wanna know why the Dolphins are doing so much better today?

Because in their quarters defense they are not rolling the Will to the line and rather are letting the mike and sam stay in zone with the safetys and thus the defense is not exploiting the weakeness that has been so evident all year. Finally they stopped acting stupid on defense and it shows.

You, sir or Madam of the 3:19 comment, are a person ofa non-discerning character.

You are a loathsome slug, who probably spends their day skulking the hallways of some governmental agency, a nameless, faceless, little gray bureaucrat who longs only to return to their slovenly abode, where a night of television re-runs, frozen pizza, and cheap beer are your only rewards.

Choosing that loathsome establishment to propose guarantees the evening will be a disaster. Bad food, horrible disinterested service, high prices and and no vibe whatsoever in a dumpy Kendall shopping center. Yeah right, a great choice.

RUMPOLE .... PLEASE publish the names of those still alive in the 2015 Suicide Pool?

Are Kenny and Colby still in?

I like Ed Newman personally but, his courtroom is a crazy place.

I wish they would put him in branch court.

Will The Ren (a venue) emerge as the establishment de rigueur for judicial candidates to conduct their funraisers?

I call a Shumie on the Ren (A Stimpy).