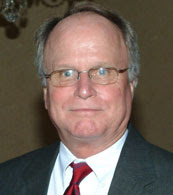 Thomas "Tam" S. Wilson, Jr. was born in Oregon in 1945. He studied at a small private college in Pennsylvania, and did a stint in the Navy, before attending UM law school graduating in 1971. He came from a long line of judges, including his father, a federal judge who decided labor cases. Another relative was the first federal judge in the Oregon Territory. And ancestor William Strong was an Associate Justice of the Supreme Court from 1870-1880, nominated by President Grant.

After "Tam" graduated from law school, he worked as an Assistant Public Defender for Phil Hubbart in the 1970s. He then became a prosecutor in the 1980s working for Janet Reno.

Judge Wilson's ambition to sit on the bench was finally realized in the summer of 1990 when Republican Gov. Bob Martinez appointed Wilson, a Democrat, as a Miami-Dade Circuit Court Judge. In the 1990 election, his first, he ran against attorney Samuel Forman, beating Forman while garnering 52% of the vote. He was re-elected in 1996, 2002, and 2008, all unopposed. With his newest term beginning in January of 2009, he mysteriously resigned from the bench on October 15, 2009. County Court Judge Antonio Arzola was nominated by Governor Crist to replace him.

To give you an idea of how well respected Judge Wilson was on the bench, in his final DCBA Judicial Poll, out of 123 judges, he ranked in the top five in "exceptionally qualified" votes alongside Judges Kevin Emas, Joe Farina, Bob Scola, and Reemberto Diaz.

South Florida Lawyer did a goodbye story in 2009 and said of Judge Wilson, "I had many occasions to be in front of Judge Wilson, and have known him outside the courtroom for many years as well. While he didn’t always rule my way, he was and is smart, kind, highly professional, and by far one of the best judges on the circuit court civil bench. He will be missed."

Indeed, he will be missed.

Tam was smart and well respected. He had this southern-gentleman mannerisms and personality, and a clear sense of reasonableness and right and wrong when it came to being a judge in criminal court. Your client never had anything to fear if his or her case ended up before Judge Tam WIlson. He has been missed and will continue to be missed. One real tragedy is that this generation of judges didn't have the opportunity to be exposed to the likes of Judge Tam Wilson. RIP friend.

Amazing friend and beautiful man. So many people are blessed to have called Tam a close friend.

Tam was one of the good guys when he was with the PD and a fair and smart judge. He was a nice guy who never seemed to lose himself in all the years he spent on the bench. I ran into him several times at restaurants and bars in the Grove after he retired. Always a smile and always glad to see anyone whom he knew. He was a friend and colleague. You are right Rump, he will be missed.

Tam was a kind man. I'm really sad to hear of his passing. The last time I saw him he was having a rum punch in the grove. He really loved people. Rip Tammy

Absolute class in and out of the courtroom, I will miss getting to catch up with him at various Grove establishments where he loved to sit at the bar and chat the afternoon away.

Judge Tam Wilson was from another era, as mentioned, he was very classy, fair and ran a very dignified and efficient courtroom. RIP Judge Wilson.

That makes me so SAD. Judge Tam Wilson was so kind and he was an example for me of what a neutral fair smart Judge should be. I am grateful to have been his friend on the bench. God bless you.

I nicknamed him "big timer". Dont recall why now. He always wore a belt with a windmill on it for decades. Tam played for the Bad News Bears in softball which was a team made up of SAOs and PDs and won many championships. He was a Hubbart hired PD which speaks volumes. After a short try in private practice with Kershaw, Jerry Hubbart and Clinton Pitts Tam was a prosecutor then ascended to the bench. Unlike alot of those donning the robes today, Tam never had a case of Black Robe fever. He was a pleasant judge and a delight to be in front of whether he ruled for you or against you. I knew he was in failing heath for a while and was not on his game as a mediator because of health but his passing still comes as a shock. We lost one of the really good guys of the last 40 years. He was a proud alumni of Fairleigh Dickenson which I would kid him about. He will be missed by all that knew him.

There was no mystery in his resignation. Tam was ill a long time prior to his death. He was a wonderful judge, a better person and will definitely be missed.

So very sorry to read of Tam's passing. He was a fine PD, an excellent Judge, and a good friend. C u soon Tam.

I am sorry to hear of Judge Wilson's passing. He was the consummate judge on the bench: a true gentleman, intelligent, fair, and unafraid to make rulings. He will be missed. Rest in peace Your Honor.

And Tam's presence, as defense lawyer (The Office), prosecutor, or judge, always offered welcome respite from the every-day strife of trial practice. He's gone, but his example inspires.


I sat at a bar in Coconut Grove with Tam a couple of times a few months ago and chatted with him about how he was enjoying relaxing in retirement. He was one of the most fair minded and even tempered judges I have ever appeared before.

Terrific friend, we'd meet at the Sandbar for Trivia, keen mind and brilliant sense of humor, will be missed by all his friends and also Lucy his ever loving pooch...

Judge Wilson performed my marriage ceremony to Roger Nolan in 2008. He said it was the best and most fun ceremony he ever performed--probably because it lasted only about 15 seconds! (It was also the last wedding ceremony he performed). We will remember him with fondness. Cathy Parks

Does anyone know about funeral or memorial arrangements?

Tam was a great friend of mine. For years I had the privilege of spending time with him at the Grove. He would always ask me how my day went, what Judge I appeared before, how it went, etc. For years, he was always interested in what this young foolish lawyer did, and would always give me advice, encouragement, and some scolding if necessary. Rest in peace my friend.

A memorial gathering is in the works--all information will be posted here, and on the FACDL listserve

"southern-gentleman mannerisms and personality, and a clear sense of reasonableness and right and wrong";"smart and well respected"; "Absolute class in and out of the courtroom"; "intelligent, fair, and unafraid to make rulings. He will be missed"; "keen mind and brilliant sense of humor'.

That's the legacy a great man creates. That's the type of legacy you judges should strive for (you read this, don't deny it)

Will any of our "new breed" even come close? Not a chance.

Great guy. No one ever said an unkind word about him. Everybody liked him. I believe he also did a short stint as a general master before he was appointed to the bench. Both he and his first wife, Marian Garcia, are now in heaven. RIP.

Tam didn't want a service but I would never forgive myself if we didn't have an Irish Wake for him at the Taurus. Is any such thing in the works?

Irish Wake at Taurus in the works?

I had the sincere pleasure to have appeared before Judge "Tam" Wilson many times and he always, if possible, took the time to speak about things that were important to him and sometimes just to make me and I'm sure others. feel good. That's the kind of man he was. To say he always did the right thing, tried his hardest to make sure that Justice was being done and that he treated everyone equally and with the utmost respect and dignity is not only 100% true it doesn't even remotely reflect the greatness of this gentleman. I was extremely saddened to hear of his passing and will miss everything about him. I always felt as if we were close (Friends) and whether he felt anywhere near as strongly about me as I did about him is really of no consequences in that just having gotten to know him over the years and having had an opportunity to appear before and have friendly discussions with him was a wonderful benefit for me and the entire legal community. He will be sorely missed and I send my sincerest condolences to his family at this difficult time. Most respectfully, Robert

I would pass Judge Wilson every morning in North Grove walking his dog with 1 of his healthcare worker's. Never knew his name but he always acknowledged me and made an endearing comment about my Golden Retriever. I started to notice his absence recently and started to ask other walkers if they knew him and a lady told me that he had died. I had never formally introduced myself but felt a connection to this man. He always had a smile on his face and was so kind in such a brief passing. I hope my brief encounters with this unknown stranger stays with me. I felt he had a lot to share. I miss our passing each morning. RIP to my "unknown friend".

As the the wife of the late Thomas G. Murray, I can surely call Tam a dear, dear friend. Learning of his passing brings back such wonderful memories of his friendship with Tom, Rob, Joe and David. (No last names necessary for those who know them) Such a kind, fair man who our daughter considered him her "uncle Tam." It's been so many years since our time in Miami, another lifetime ago, but Tam will remain in our hearts forever. I can only envision him and Tom together now, discussing the good times they had with the guys "grooving in the Grove!" RIP dear friend - you will be sorely missed!

Tam - what a tremendous guy - I played softball and golf with Tam in the 80's -
I never heard a bad word from him - he always had a smile on hit face - Thank You for the good times Tam - will be seeing you soon.
Owen