SIGNS OF THE APOCALYPSE

The Sixth Seal – Signs In The Heavens
“I watched as He opened the sixth seal. There was a great Earthquake. The sun turned black like sackcloth made of goat hair, the whole moon turned blood red, and the stars in the sky fell to earth, as late figs drop from a fig tree when shaken by a strong wind. The sky receded like a scroll, rolling up, and every mountain and island was removed from its place. Then the kings of the earth, the princes, the generals, the rich, the mighty, and every slave and every free man hid in caves and among the rocks of the mountains. They called to the mountains and the rocks, “Fall on us and hide us from The Face of Him who sits on the throne and from the wrath of The Lamb! For the great day of Their wrath has come, and who can stand?” (Revelation 6:12-17)
A few Miami Dade Corrections busses got into a fender-bender on the way to court today. About 80 defendants missed their court dates. Corrections motto: "Neither rain nor sleet nor snow nor gloom of night shall stay these officers from the swift completion of their appointed rounds. But 836 might."

Miami Federal Judges are very hard working. As per Southern District Blog. Writing "denied" over and over is hard but fulfilling work if you can get it.

Ultra is a back.

Wicked is playing in a local theater.

Passover is next week. We offer great blog props to the first lawyer who appears in court next week and tells the judge "let my people go."

A tender religious moment? Or battery with a religious artifact (which is an enhancement)? 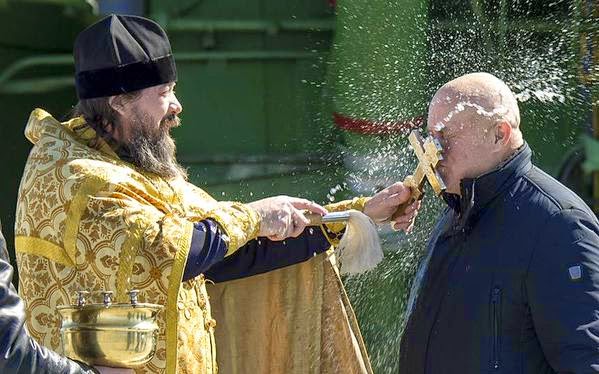 We leave you for this glorious spring weekend with the thought that for some of us, the weekend is just another work day:

(note the key words "my staff")

Posted by Rumpole at 2:14 PM
Email ThisBlogThis!Share to TwitterShare to FacebookShare to Pinterest

Rumpole, how did you miss the epic smack down the Third has laid on Mean Girl Brennan???

7:26 - You might have a 26-year-old daughter at some point. How would you feel if she were the subject of your post.

She may be 26 but I'm pretty sure she is an idiot. How do you think I can tell?

Not only is Brennan a prosecutor wearing the black robes, she is also very stupid in not knowing the basic law that a judge does not say anything regarding a motion to recuse except DENIED.

Can you imagine being an ASA in front of Brennan? Easiest job in the world.

Your 26 yr old is taking her to Ultra so she can spend your $ buying the tickets and the drinks and you can take pictures of her and her friends while she checks out all the shirtless guys her own age.
She'll put you to bed and then go to the after parties with them.

No actually it is not so easy for a prosecutor with Brennan. She yells at them too and she's generally mean to everyone.