WORLD CUP UPDATE: It was like May, 1940, all over again, as Germany ran over France with nary a peep from the French. This time it was on the Soccer Pitch, but the result was the same, and like 1940, it wasn't as close as the score indicated.

Next up: Brazil vs. Colombia.


The unanimous Declaration of the thirteen United States of America,
When in the Course of human events, it becomes necessary for one people to dissolve the political bands which have connected them with another, and to assume among the powers of the earth, the separate and equal station to which the Laws of Nature and of Nature's God entitle them, a decent respect to the opinions of mankind requires that they should declare the causes which impel them to the separation.

We hold these truths to be self-evident, that all men are created equal, that they are endowed by their Creator with certain unalienable Rights, that among these are Life, Liberty and the pursuit of Happiness.
That to secure these rights, Governments are instituted among Men, deriving their just powers from the consent of the governed, That whenever any Form of Government becomes destructive of these ends, it is the Right of the People to alter or to abolish it, and to institute new Government, laying its foundation on such principles and organizing its powers in such form, as to them shall seem most likely to effect their Safety and Happiness. Prudence, indeed, will dictate that Governments long established should not be changed for light and transient causes; and accordingly all experience hath shewn, that mankind are more disposed to suffer, while evils are sufferable, than to right themselves by abolishing the forms to which they are accustomed. But when a long train of abuses and usurpations, pursuing invariably the same Object evinces a design to reduce them under absoluteDespotism, it is their right, it is their duty, to throw off such Government, and to provide new Guards for their future security.

Remember the power of these words. And recall those who bravely sacrificed their lives for the rights and freedom these words created and established. 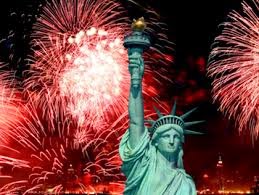 Enjoy your holiday weekend.  See you in court Monday.

Posted by Rumpole at 2:30 AM
Email ThisBlogThis!Share to TwitterShare to FacebookShare to Pinterest

Big big 4.th of July blowout World Cup party at REN - a venue. 50cent shots for 20 minutes after every goal. Pick your team at the start and everyone wearing a winner's wristband at the end gets a free shot. Plus big deals on Shumie cigars. !! An all American 4.th at the REN !! Come party!!

What a loser - REN. Get a life

The big get is to get an invite to the private party for the Colombia - Brazil game. Back room. Top quality cigars not available - if you get my (Cuban ) drift. Plus a roasted pig. Chiarrones anyone??

Great post Rump. I am a libertarian. Hate to rain on your parade but you left something out. After "created equal" there should be this: *except if you are a Negro."

I would say that the ideals were correct. The practice and implementation left much t be desired. But as much as we should be judged on our mistakes, we should also be judged on how we correct them.

Take for example the issue of Gay Marriage, while we are far from perfect, we live in a country where the issue is openly debated and where those in the minority have the ability, indeed the right to have their voice heard. I don't see much debate about Gay Marriage in Iran or Egypt or Russia or even Japan or Australia.

Rump, gotta be careful here. They asked us to leave our cell phones at the door but I smuggled mine in. This party is outrageous. There is a bevy of micro bikini clad women from both Brazil and Colombia and they are treating the guys like kings, lighting our cigars, bringing us food and drink, even foot massages. We had to leave our cell phones because of the NO PICS ALLOWED rule.

We went to REN recently. The food was cold, service non-attentive, the prices were high and the place deserted. I felt so used.

Rump: Don't forget one of the greatest speaches in U.S. history, exactly 75 years ago today.

Check out REN a venue- on Yelp. DoZens of 5* reviews.

Needless to say the Colombian loss has out the big fella in a funk here at the invite only party at REN- a venue.

That whenever any Form of Government becomes destructive of these ends, it is the Right of the People to alter or to abolish it, and to institute new Government, laying its foundation on such principles and organizing its powers in such form, as to them shall seem most likely to effect their Safety and Happiness.

This is radio shumie
is there any shumies alive out there?

who wakes up on a saturday morning and feels the need to write about shumie?? i'm gonna guess john blecher

That's why they call him El Jeffe at The REN. (A venue). The boss.

To Rosalita can you come here with my cigar ?

...that we are endowed by our creator with the right to life . Liberty, And to leave work early a/k/a Shumie Time

Rump you wrote a retort to one of my recent criticisms pointing out you have some thousands of unique visitors daily. I can't argue with that, but can you translate some of those into commenters? A lively comments page would be a great addition to your gossip site, more than this ren/shumie shit. Imagine if only a fraction of your thousands of visitors participated in daily conversations about life in and around REG.

Suggestions, if youre so interested: Build the comments into the first page, below your posts, to increase their visibility. Consider instant-posting the comments. If there is abuse, you can moderate it afterwards and delete offending posts (and even IP ban egregious offenders). Real-time posting could encourage real conversations, rather than checking back a day later to see if your comment has been commented upon.

I sometimes troll you but I do enjoy your site. Right now it's a one-man show, and you've earned the right to keep it that way. But it would be even greater as a true community posting forum.

You are not a long time nor careful reader to this blog. Here is what occurred when I started and had real time comments: 1- some lunatic who still trolls the blog and is not a lawyer tried to shut down the comments by posting in the comments section the entire Florida bar list of lawyers. So when you wanted to comment you had to spend endless minutes scrolling down. 2- nasty people would post vicious rumors. Let's say you are a lawyer. Would you want posted - even for a few hours until I could remove it- several statements attesting to the sure fact you are sleeping with your secretary? I can't allow the blog to be used to hurt people, even for a short period of time. So I or one of my interns has to clear each message.

11:51. HEY! Mind your own business go to the Broward or west palm beach blog if you're unhappy here.

11:51 here. You posted some months ago that you were looking for a replacement. Why not stick around, but add five or six contributors? Or even ten? Take unsolicited submissions for posts, wherein you know the authors' names but agree to post the content pseudonymously. From the much there should arise a handful of decent writers. Then, if and when you decide to step away for awhile, the thing has a life of its own. An editorial board, of sorts.

And it's not that I don't like it here. On the contrary. Rather that it's such a good site and apparently has such good traffic that it could be made even better by more lively discussion and more active participation.

There once was a man name of Rex
Who's thing was too small for his sex
When booked for exposure
He replied on disclosure
Diminimus non curat lex.