A little Miami REGJB History: Stay tuned and learn what led  a young, ambitious ASA, who was someday to become a two-time disgraced Judge, to sign an arrest warrant for Jim Morrison, lead singer of The Doors.  The prosecutor, Alphonso Sepe, would go on to become a County Court Judge. Sepe resigned from County Court in a scandal, only to return Nixon-like to Circuit Court via an appointment by the Governor. His tenure on the Circuit bench ended in the Court-Broom scandal and a federal prosecution. 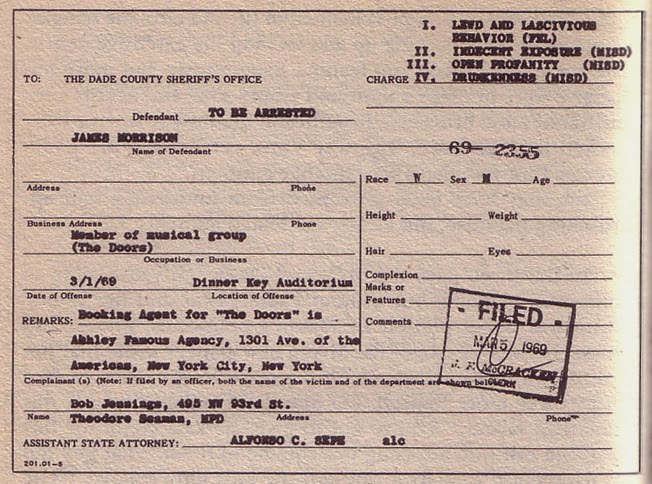 March 1, 1969.  Twenty five thousand young Miamian's (at least two to three times more than expected) woke up planning to attend the Doors concert at the Dinner Key Auditorium.
In California, Jim Morrison woke up with an intercontinental airplane flight ahead of him.  By the time the flight was scheduled to leave, Morrison was in the middle of another epic fight with his girlfriend Pamela Courson. Morrison missed his flight and started drinking. After a  series of connecting flights, airport lounges, and alcohol, Morrison arrived in Miami drunk and hours late.

Meanwhile, the scene outside of Dinner Key was growing chaotic. The concert promoter was adding seats to the Auditorium.  Bill Siddons, the Doors manager got into a screaming argument with the promoters. The Doors fee was a flat $25,000.00 anticipating a gate of $50,000.00.  With the new seats Siddons wanted more money. The promoters said no. Siddons threatened to have his band walk. The promoters countered that while the band could walk, their equipment would stay. In the midst of all of this Jim Morrison showed up, drunk.  Not just drunk, not even, according to those at the time who knew him best,  Jim Morrison drunk, but epically drunk.

This is a partial description from the Doors website as to what happened next:

...it wasn't Jim's finest hour. Morrison rapped incoherently into the microphone. He eventually managed to sing a couple of verses but lost interest quickly, returning to his aimless sermon. "I'm not talking about no revolution. And I'm not talking about no demonstration. I'm talking about having a good time. I'm talking about having a good time this summer. Now you all come to L.A. You all get out there. We're going to lie down there in the sand and rub our toes in the ocean and we're going to have a good time. Are you ready? Are you ready?......Are.... you.....ahhhhh!"...You're all a bunch of f**kin' idiots." Let people tell you what you're gonna do. Let people push you around. How long do you think its gonna last? How long are you gonna let it go on? How long are you gonna let them push you around. Maybe you love it. Maybe you like being pushed around. Maybe you love getting your face stuck in the shit.....You're all a bunch of slaves. Bunch of slaves. Letting everybody push you around.
What are you gonna do about it? What are you gonna do about it...What are you gonna do?"
On and on it went . At some point Jim staggered over to Robby and fell to his knees, focusing his attention on Robby's guitar solo (conflicting perceptions would debate his true intentions in the months ahead).
When someone jumped on stage and drenched him with champagne, Jim took his shirt off. "Let's see a little skin, let's get naked." Damp clothing fell to the concrete floor. "I'm not talking about revolution, I'm not talking about guns and riots, I'm talking about love. Love one another. Love your brother, hug him. Man, I'd like to see a little nakedness around here....grab your friend and love him. Take your clothes off and love each other." More clothing carpeted the concrete. When Jim finally got around to talking about what was really on his mind no doubt everyone was ready. "You didn't come here for music did you? You came for something more, didn't you? You didn't come to rock'n'roll, you came for something else didn't you? You came for something else --WHAT IS IT?  You want to see my c*ck, don't you? That's what you came for isn't it? YEAHHHH!"  Morrison waved his shirt in front of his crotch in bullfighter tradition, he took it away for an instant and taunted. "See it? Did you see it?" The audience proceeded to "see" exactly what they wanted to see (reality has never been defined).


Dade County issued the arrest warrant signed by Sepe. Morrison surrendered and returned to Miami. There was a trial beginning August 12, 1970.  Murray Goldman was the Judge. Max Fink was Morrison's lead defense counsel along with Robert Josefsberg and Don Bierman.  ASA Terry McWilliams (one of the best lawyers most of you have never heard of) led the prosecution team along with Alphonso Sepe,  Ellen Morphonios, and Leonard Rivkind. Sepe, Morphonios and Rivkind would all go on to become Judges, Rivkind a chief Judge in Dade County.
Morrison and his legal team turned down a pre-trial offer to play a benefit concert in Miami. Morrison was convicted by a jury of two misdemeanors and acquitted of the more serious felony charge. Judge Goldman sentenced Morrison to six months in Jail. Morrison remained free on an appeals bond and was found dead in Paris on July 3, 1971 of a drug overdose before his appeal was completed.

And there you have a bit of REGB history.

See You In Court, where sometimes we can be found quietly humming a Doors tune.

Posted by Rumpole at 8:59 AM
Email ThisBlogThis!Share to TwitterShare to FacebookShare to Pinterest
Labels: Jim Morrison

I thought an arrest warrant had to be signed by a judge. Apropos Sepe, he ended up doing 18 months in Homestead after taking a plea. His first trial ended in an acquittal save for a hung jury on one RICO conspiracy count. Judge Gonzalez ruled that the conduct underlying the acquitted counts could not be used in his re trial. That would have made a second prosecution impossible. The Feds appealed. They won. Sepe, now represented by Quinon, knew very fast that his goose was cooked. No way could be win the lottery twice. The evidence against him was overwhelming. The jury's acquittal was totally against the weight of the evidence. And now Davide Goodhart, his former co defendant and bagman, was set to spill the beans. Sepe made a very wise decision and took a vacation. A different era with fundamentally different people. Sepe actually reminded me of the actor who played Angelo Errichetti in American Hustle: a really decent human being who succumbed to the dark side.

Sepe always reminded me of the Judge in the great movie staring Paul Newman: The Verdict.

To all the younger lawyers who did not know Sepe, he was not a decent man who went astray as suggested in the comments at 12:10. He was an egomaniacal, mean spirited judge who humiliated lawyers, especially the weaker ones, abused the ethics of his office at least twice where he was arrested and made a mockery of the system in general. He sold his position for his own greed . Some of his egregious behavior include attempting to seduce a state attorney's secretary in return for reducing her husbands prison sentence. He also demanded a share of court appointment fees with lawyers he appointed who had difficulty cultivating a private practice. Another example of his behavior occurred when a black defendent would appear in front of him and ,if he had trouble understanding him, he would ask the late Paul Pollack to interpret the defendants request., which was in English. It was humiliating for all to see, especially the defendent. Sepe was bright, but twisted and history should reflect that he was a blight on the profession and on the bench.

There's not a lot about that I can disagree with.

I've talked to two people who went to the infamous Doors concert--one (a stoner) is positive that he saw Jim's dong and the other one (a young Republican who also worked for the GOP at the 1972 convention in Miami Beach) told me that she did not see it but could not say for sure that he might have exposed himself. I've also heard that the original criminal information in the case has mysteriously disappeared from the court file--probably in the possession of a collector by now

Yo Rump. Watcha ya doin? Sepe is a paisan. Fuggedahboutit!

Hey Rump -- do you think that there was any "Cause and Effect" between Morrison's conviction and the pending 6 months of Dade County jail time with his "suicide" drug overdose?

Hey Judge Goldman, that was a pretty harsh penalty under the circumstances.

I was a young Judge during some of the relevant times -- and I always felt that there was a very close knit group of old timer corrupt Judges. It was more of a RICO situation and it was definitely a conspiracy to commit major crimes by this criminal group of jurists. I have stories that would make your head spin of things that I saw - now that I reflect back on those times.

I wonder if there is ANY corruption now, even to a smaller degree?

PS: Judge Hoyle --- VERDICT actor MILO O'SHEA (great eyebrows) -- was exactly what was going on in the Justice Building when I got there Rumpole. You and I once spoke about how much we love that character from the Verdict movie. Don't worry: it is confidential and privileged under Judge/Rumpole privilege.

I think that Ted M. was under both administrattions.

A female Republican will never see the dong until it is too late. they are horrible eye witnesses and terrible wives. Trust me, i am onto the third one.

Judge leon firtel wasnt in Beleize for the capture but his credibility was. famous last words, "i call it the way i see it", "if I am wrong, I'm wrong. ok.

12 years a Slave? HA. Try 12 hours with the Shum. The Oscars after party at REN just wound down. What a party! The stars, the bar, the booze the babes, it was all ultimate good times.

Phil Davis was a Reno product.

Re: Alfonso Sepe. I don't have an opinion one way or another, but here are two old stories from the 70s that might shed some light on hizzoner.

we used to say : Sepe that is something Sexual
Sepe was know for being a creep w/ women

As to Phil Davis, he was a piece of Manure.
Most Unfair Judge , unless you were paying him.

I haven't lost a trial since the Morrison verdict.

Al Sepe is still alive and living in a small place doing absolutely nothing. He is a truly broken man.

https://www.facebook.com/sharer/sharer.php?u=http%3A%2F%2Fwww.wsvn.com%2Fstory%2F24873912%2Fofficer-attempts-to-use-status-to-avoid-dui%3FautoStart%3Dtrue%26topVideoCatNo%3Ddefault%26clipId%3D9905598%23.UxU7LvJUSbc.facebook "I AM METRO BRO," THE NEXT TIME YOU STATE ATTORNEY BLINDLY BELIEVE A COP REMEMBER THE SECOND PART OF THE VIDEO- "WE COPS GOTTA HELP EACH OTHER"

Bill's 1975 story is funny -- but even funnier is the story that same day on Rod Stewart's "promise to be faithful" to Britt Eckland.

The jydge-s name was Murray Goodman, not Goldman. Murray Goldman did not get appointed until 1979. FYI.