For those of you who support capital punishment and trumpet the greatness of the American judicial process, the news that George Stinney may get a new trial is probably considered good news and proof of the fairness of American courts. The triumph of Due Process as it were. 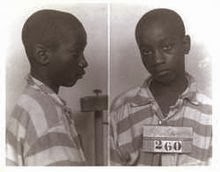 The problem is that George Stinney was electrocuted at the age of 14 in Georgia on June 16, 1944.
George Stinney was so small that the straps on the electric chair couldn't be tightened enough to secure his hands and legs.


Stinney, who by now you probably realize was black,  was convicted of the first-degree murder of two white girls: 11-year-old Betty June Binnicker, and 8-year-old Mary Emma Thames.  No physical evidence existed in the case, and the sole evidence against Stinney was the circumstantial fact the girls had spoken with Stinney and his sister shortly before their murder, and his confession, which was obtained after the police bought him an ice cream cone.

Following Stinney's arrest, Stinney's father was fired from his job. Stinney's parents and siblings were given the choice of leaving town or being lynched. The family was forced to flee, leaving George Stinney with no support during his 81-day confinement and trial.
The entire Stinney trial, including jury selection, took one day. Stinney's court-appointed defense counsel was a tax commissioner campaigning for election to local political office. Stinney's lawyer did not challenge the three police officers who testified Stinney confessed to the two murders, despite this being the only evidence presented by the prosecution. The police did not make written records of Stinney's purported confession, and at trial, Stinney denied confessing to the crime.
The jury at Stinney's trial consisted entirely of white people; due to racial segregation, no African-Americans were present in the courtroom. Stinney's counsel did not call any witnesses. Trial presentation lasted two-and-a-half hours. The jury took ten minutes to deliberate, after which they returned with a guilty verdict.

Lawyers have now filed a motion for a new trial which a circuit judge is considering.

We don't about you, but we keep thinking of that poor small child, his family forced out of town, surrounded by unfriendly white faces, being led in and out of court, and then a few months later, being led down some hallway in some prison, strapped into a chair, and electrocuted.

Yeah, this is some great system of jurisprudence we have.  Something to brag about.
The next time someone tells you that no innocent person has ever been executed in the United States, mention to them that George Stinney never really had a chance to prove his innocence.

See you in court.
Posted by Rumpole at 6:40 AM
Email ThisBlogThis!Share to TwitterShare to FacebookShare to Pinterest
Labels: George Stinney

I'm not sure that a 70 year old case makes for a persuasive argument about today's system.....

Was he afforded due process as we understand it -- no.

But there is more to the story than your summary quote from Wikipedia:

"Several who gathered Thursday at the restaurant said they had met Stinney and believe that he committed the crime.

Sadie Duke said she always believed Stinney was guilty because only a day before, he had threatened her and her friend Violet Freeman as they went to a church to collect water.

“He said, ‘If you don’t get away from here and if you ever come back, I will kill you,’” Duke said.

Evelyn Roberson, who was 15 at the time of the crime, said her husband often fought with Stinney as they tended cows near the town. “They called the (Stinney) boy ‘Bully’ because he was so bad to everybody,” she said. “Everybody he met he wanted to fight.”

Roberson said Stinney first confessed to the crime to his grandmother, who called the authorities. “I don’t feel like it’s an open case,” she said. “I think he did it, and he should have gotten punished for it and he did.”"

Point being - there was a reason to believe he was involved beyond the color of his skin and youth. Anybody who knows anything about juvenile would understand that 8 is on the young side, but there are a shitload of young kids in juvenile who are capable of some seriously monstrous shit.

History can, very dramatically, point out the pitfalls of the then contemporary society.

In this case, the State of Florida, as well as the constituents , were guilty of evil and repulsive racism.

Even today , it is inevitable, that our current system, when viewed historically, will show obvious societal pitfalls (i.e. Minimum mandatory sentences, the excessive reliance on cooperating witnesses and the
gauging of the poor through crazy court costs and fines) .

Ok so there may have been a mistake about 70 years ago. We get it.

What about all the kids sentenced to life in jail and now are being resentenced to 40, 50, or 60 years?

Today, do we get it?

Back to Mike the Commish Grieco....Mike got fired for using Facebook as a prosecutor to make him look cool.

Now, he does this.

Has anyone read his Bar complaint for impersonating a prosecutor and interfering with a criminal investigation.

He was executed in South Carolina, not Georgia.

I have read quite a bit of American history, especially the Reconstruction era. I am almost ashamed to say it but my first reaction was wow!, they actually gave him a trial! In the 1890's he and his family would have been hanged before an arrest. This story is downright mild compared to other racial injustices that occurred south of the Mason-Dixon Line post civil war.

I've been following the case. I think there is no question that Stinney was denied due process. There is probably less of a question about whether the way he was treated was driven by anything other than rank racism. Clearly it was. But, neither of these things make him innocent.

Let's assume though, for the sake of argument that he was innocent. Demonstrably innocent. What does this 70-year-after-the-fact mockery of a proceeding do that is in any way productive? To put a finer point on it, what does it do for the juveniles -- many of the them black -- that are currently being denied due process and subjected to draconian (and somtimes racist) treatment? What does it do for our system today? The system that should matter? The kids that should matter?

It is perfect proof of why racial politics in this country has risen to such an absurd level that it is going from accomplishng nothing to turning back the clock. It's all utter nonsense. Absolute and utter nonsense, which distracts from a discussion about the real problems.

Didn't know about the discipline from the Florida Bar. Typical Grieco to flash a badge for personal gain. What a tool.

I do remember when Sharpstein brought out the DJ Esquire fiasco to get Grieco kicked off the Sean Taylor case (and effectively booted from the SAO).

I read the consent judgement, Grieco received a great result.

The two men could have their probation terminated early after a year, but Judge Miguel de la O stressed to Starks and Pinder that he would only make that decision if the two did more than just the required community service.

“I don’t see why a defendant should be early terminated for just doing what they’re supposed to do to begin with,” said de la O.

when does e-file for civil traffic start? any one know. I have been using e-file in other florida county for a while -- It works pretty well but not as good as the Feds e-file thing..

Wow, I read the Bar complaint and result. Do notice that Grieco didn't hire a lawyer to help him. BAD JUDGMENT. It looks like Grieco should have been arrested for obstruction. Also looks like that all happened when he was being fired for his Facebook postings.

It also looks like he was warned and couldn't stop a long chain of bad judgment.

Mike, please, grow up. We all do sooner or later.