"Once a rat, always a rat" was the quote from ASA Gail Levine in the murder trial of Jason Beckman accused of killing his father. Levine was commenting on the testimony of an inmate that Levine put on the stand to say that the  defendant confessed, and the fact that he had his sentence reduced by one year. 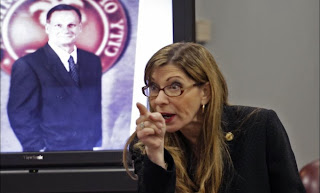 Sort of an odd statement to come from the prosecution, but the logic behind it is that the state is not marrying themselves to a turncoat. Beckman was convicted on Monday night of first degree murder. Ovalle's Herald article is here. Jurors deliberated two whole hours. Your thoughts on this strategy?

E-FILING: The county has gotten it's act together. The court system and clerk's office and SAO and PDs are all on board. E-filing will start January 6, 2014.

Congrats to.....(boy this hurts) Broward County for getting e-filing up and running. No word as to when Miami-Dade will hop on board, but we hear they're close. There are a few last minute hurdles for the Miami-Dade Clerk's office to overcome. They need 1) Computers; 2) Those screens that aren't the orange hue; 3) Better dial-up modems; 3) Those printers that don't use the green and white striped paper; 4) A compu-serve email account through the AOL portal. Welcome to the early 1990's.

See You In Court.

Posted by Rumpole at 4:00 AM
Email ThisBlogThis!Share to TwitterShare to FacebookShare to Pinterest

Ok, who's going to riff on the "pot calling the kettle black" hanging curve ball here?

Reid Ruben gets 3-4 day verdicts , if he gets them at all, while Gail Levine gets 2-3 hr verdicts. Gail is a lock for her first MVP (most valuable prosecutor)

What's the difference between comedy and comity?

The real question becomes, how many of Gail's verdicts are reversed vs. Reid's verdicts. Who cares how long it takes toget the verdict, its making it stay that way that counts.

We have had e-filing in family court for a few months now and e-service since October. Just like the fed system. No more postage, no more faxes. No more long emails to opposing counsel with service of process language. Pretty damn good.

Google her name and see the Fla Sup ct trashing her conduct in a death case closing argument. She's a disaster on wheels.

Orange ia the new black and Gail is the new Milt.

i know gail. she hates my guts. she views me as a threat, as well she should. i have kicked her around every single time i have ever argued against her. once when i was an intern. she is a bully. i have always enjoyed torturing bullies. having said that, i have never seen her do anything really unethical and she has an excellent conviction record. mvp ? no. but i would keep her on the roster.

What about the new PD they call "the new country dave'? His nickname is Scaramouch or the mooch for short.

I don't know about the new Country Dave but I do know about the original. His name is Dave Pettus. He is an excellent attorney. He could stand to improve his bedside manner. Apart from that he is one of the best criminal lawyers in Miami.

A gangster who knows.


The letter is the finest piece of epistolary prose ever written on this continent, and if Lincoln didn't write it, he meant to. It serves to remind us that the highest function of political leadership in America's democracy is to inspire us with a regard for those principles that set this country apart.

As I do every year on the anniversary of its writing, I take pleasure in sharing this remarkable letter with my friends:

"I have been shown in the files of the War Department a statement of the Adjutant General of Massachusetts that you are the mother of five sons who have died gloriously on the field of battle. I feel how weak and fruitless must be any word of mine which should attempt to beguile you from the grief of a loss so overwhelming. But I cannot refrain from tendering you the consolation that may be found in the thanks of the republic they died to save. I pray that our Heavenly Father may assuage the anguish of your bereavement, and leave you only the cherished memory of the loved and lost, and the solemn pride that must be yours to have laid so costly a sacrifice upon the altar of freedom.

"Yours very sincerely and respectfully,

This blog is soporific. The blogger simply horrific. The topics simplistic, the discussion sophomoric, the comments idiotic. Good day sir.

Big fan of Lincoln here, but the language in that letter is pretentious and esoteric, especially in a time of utter grief. He sounds like a 2L in mock court and anyone who's in pain knows the last thing they need is bullshit 5 dollar words. Here, let me fix it for Abe:

7:29 AM,
Country Dave Pettus was a legend at the PDs office. Emigrating from Kazakhstan at a young age, he grew up on the streets of the Bronx, New York, where at a tender age he became proficient at backgammon and soon became the family's chief breadwinner at backgammon gambling in the parks of New York. As a child Dave had two loves: backgammon and the Andy Griffith show, and it was from watching hundreds of hours of the Andy Griffith show that Dave picked up his southern accent that would someday land him the tag "country Dave....
"

From Dave Pettus at the PDs, a retrospective", the New Yorker, to be published, April, 2014.