TRIAL CONDUCT:
What judge in the REGJB gives the best trial? That doesn't mean the judge that rules for either side the most. What we're talking about is the judge who understands the jobs each lawyer on each side of the case has and lets them do their job with minimal interference.  US District Court Judge Jose Gonzalez (now on senior status) was perhaps the best we ever appeared in front of. Judges Middelbrooks and Dimitrouleas are both judges who in our experience  let the lawyers alone during trial. In State court, it's been a while since we had a judge like Ed Cowart grace our courthouse.
Sadly, many current judges were never trial lawyers. How that sad state of affairs came to be, we'll never know. But trial judges would be wise to peruse Caldwell v. State from the 4th DCA:

In our view, the trial court’s remarks to defense counsel during his cross- examination were undignified and inappropriate. See Fla. Code of Jud. Conduct, Canon 3B(4) (2012) (“A judge shall be patient, dignified, and courteous to litigants, jurors, witnesses, lawyers, and others with whom the judge deals in an official capacity. . . . )
The accused had a right to be represented by an attorney and have the attorney treated with the consideration due such an officer of the court and belittling observations aimed at the attorney are, necessarily, injurious to the one he represents


JUST A NORMAL ENCOUNTER:
What happens when a law abiding citizen/good samaritan has an encounter with a city of Miami Beach police officer? 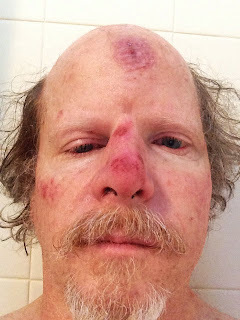 The Herald story is here.
Brings to mind the old joke: How many Miami Beach police officers does it take to throw a defendant down a flight of stairs? None. He fell on his own. Repeatedly.
FUNNY TWEET - that actually has a poignant side to it:


David Ovalle ‏@DavidOvalle305
Saw a group of lawyers at AuBonPain praying over lunch. Refreshing, I thought. Grace. Then I realized they were all on their smart phones.

FANTASY FOOTBALL: For two years we have been bombarded with emails from dozens of people begging us to set up a fantasy football league. We finally do it, and we still have spots open. Send us an email FBpoo12@gmail.com and we'll send you a link. The draft has been moved back to Monday September 2, 2013-Labor Day evening (There's no crime for drafting your team with a few margaritas on board). Join up while there is space.

We often write our posts the evening before, and sometimes the topic stays with us. "A judge shall be patient, dignified, and courteous..." It's awfully hard not to laugh out loud.

See you in court.
Posted by Rumpole at 2:30 AM
Email ThisBlogThis!Share to TwitterShare to FacebookShare to Pinterest

Ed Cowart was the best judge ever to don a robe in this county, bar none. He was courtous to all,stern, ruled quickly, and let lawyers try their cases.The only rule he had was that neither the state or the defense could strike an attractive female juror. If you did, his baliff"Chalk" would be let you know that you should not have done that.

to the person who sent me the comment with "do not print" send me an email= I don't recognize the initials.

I too tried a 5 day trial with Federal Judge Gonzalez. He was courteous, respectful, and didn't micromanage anyone.

How about the opposite: Judges who cannot stop telling the lawyer what to do even without an objection from the other side:

Judge Adalberto Jordan gave me the best trial I've had.

Yup Bert Jordan was tops as well. After one trial told me- I would have bet a lot against you. He meant the facts were tough, but we pulled out a win and he was congratulating us and I appreciated it. Total class guy.

Best trial I've ever had was in front of Burt Jordan. Brilliant, patient, and a class act.


Shame on Horace. 50 years ago today one of the most memorable speeches in the history of our country took place, and no mention of it on the BLOG.

August 28, 1963, is the date of perhaps the best-remembered speech in our lifetime. Here is its peroration:


I still have a dream. It is a dream deeply rooted in the American dream.


I have a dream that one day this nation will rise up and live out the true meaning of its creed: “We hold these truths to be self-evident, that all men are created equal.”


I have a dream that my four little children will one day live in a nation where they will not be judged by the color of their skin but by the content of their character.


I have a dream today!


I have a dream that one day, down in Alabama, with its vicious racists, with its governor having his lips dripping with the words of “interposition” and “nullification” – one day right there in Alabama little black boys and black girls will be able to join hands with little white boys and white girls as sisters and brothers.


I have a dream today!

Jordan is great - Judge Rosenbaum is as good. Really really great. Love being in front of Judge Cooke as well.

The peroration to the "I have a dream" speech was not even contained in the written notes, which means that MLK ad libbed this whole section. An impressive bit of speechmaking if there ever was one.

i have a dream for the sake of those who know you that you shut your trap.

the best trial judges are murphy and thomas

Judge Altonaga is great. Pleasure to try a case in her courtroom.

anyone who says seitz is the best trial judge is a person who has never heard the words not guilty. exactly, a prosecutor or former prosecutor..

bert jordan is the best ive ever been before. then scola. then emas.

Arthur McGinnis was slow but a Great Judge.
Bagley was good, I enjoyed being in his division.
Ric Margolius, wild as he was, gave a good trial
Rodriguez-Chomat gives good trial also .

You've never tried a case, or you're a prosecutor .

Saying Seitlz and ungaro give good trial is ridiculous. Seriously . Keep your mouth shut and You won't look a fool.

They're the worst , Seitlz being the absolute worst. She wasn't even a practicing lawyering. She never tried a case before she took the bench. She's the worst .

Ungaro spends the whole trial letting he jury know it should convict .

Rothenberg was great when I was an ASA. She was like a trial partner with a robe.

Expert had a death in the family and he moved his schedule all around to accommodate the expert.

Just think how my judges would have said, fuck you, move forward or rest.

Hands down Jordan on the federal side. Not even close.

If you think the judge was a jerk in Caldwell, then read this: