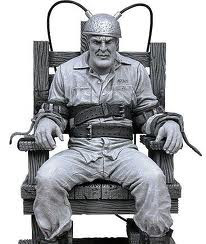 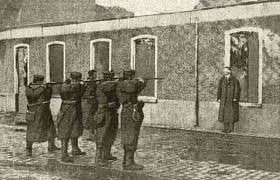 "It wouldn't bother me if we took them up to the Sunshine Skyway Bridge and threw them off, and if things were right with God they’re traveling in that direction anyway ....."

Those are the words uttered today by Florida Republican House member Brad Drake***. Drake has had it with our belly-aching over whether lethal injections may have been causing some pain to death row inmates. So today he filed HB 325 and will ask the Florida legislature next Spring to bring back firing squads and fire up "Ole Sparky".

***Mr. Drake is a 36 years old Baptist born in Fort Walton Beach; he represents the constituents of Defuniak Springs and he lists his interests as fishing, Florida history, golf, growing vegetables, hunting, NASCAR, and is a card-carrying member of the NRA.

In other news, newly appointed Circuit Court Judge Thomas Rebull was officially sworn in last week and is assigned to the Circuit Criminal Division. He takes over Judge Mary Barzee Flores' division. Has anyone been in front of him yet and care to comment?

In JNC news, as the result of Judge Rosa Figarola's appointment to the Circuit Court bench, the JNC will interview ten candidates and nominate up to six of them and send those names to Gov. Scott for his consideration. Interviews take place on October 21:

The JNC will be busy as three days later on October 24th, they will conduct interviews to replace the retiring Judge Amy Steele Donner and also Judge Ivan Fernandez who moved South and West to "The Bunker" aka the 3rd DCA:

And for those that inquired about the names of the candidates who have officially filed for 2012:

Tanya Brinkley & John Malgoza Rodriguez filed in same race. Rodriguez has thrown down $100,000 of his own money to fund the campaign.

Fleur Lobree vs. William Pena Wells. Mr. Wells has been practicing in Florida since 1988. In 2002, he was suspended from the practice of law for three years nunc pro tunc to October of 1998. He petitioned for Reinstatement and was reinstated in 2004. He has a solo practice in NMB.

The Florida Representative claimed he heard the idea at the local Wafflehouse and thought it was good enough to file a Bill at the legislature.

For the intellectually bankrupt Republicans, the local Wafflehouse is the best place to drum up ideas lately

I really thought Ortiz and Lindsay were gonna wait out for US Supreme Court spots.

Norma Lindsey is God Awful stupid. The thought of her presided over a murder case gives me chills. Judge Miranda is too tempermental and takes things way too personally. But there are a quite a few judges on the circuit bench who share the same qualities. Let's hope that White-Labora finally gets her ticket to the circuit bench.

I haven't appeared before Judge Rebull yet. He's got big dainty feet to fill. I heard from a Judge that Miguel De la O spoke at Rebull's investiture and brought down the house. Apparently they're very good friends, and unless you read the Captain's reports regularly you would not have known Miguel was up for the seat Scott gave to Rebull. I wonder if that's ever happened before.

the Orlando three - the caraballo brothers and joel lebron all deserve the death penalty. preferably to be tortured after they rot for 20 years in prison.

so does chavez- the animal who raped and killed jimmy rice...

they should be burned alive people. the firing squad is much to humane!!

I think Ivonne Cuesta will be a good Judge. This is based on the fact that I have worked w/ her and she is smart, knows the law and has lots of common sense. She should have a good Judicial Temperment, also.
D. Sisselman

Nice work Captain, but hasn't Rumpole showed you yet how to include a hyperlink inside your piece without having to type the entire http?

You have to do something really, really bad to be suspended by the Bar for 3 years and this yahoo wants to be a judge?

Ok everyone changing the subject: I am selling my Attorney Wheel Position, C1- #5 and C2- #3, If anyone is interested, Please let me know: Different payment potions accepted….. Cash, Credit Card, Money Orders, and definitely SEX…….…. Any other ideas are welcome…… Thank u.

I say bring back the guillotine

I am sure as a Good Babtist the State Rep should ask : WWJD ?
But, I guess he wants to be the first to throw the stone.
Gotta Love those god-fearing evangical christians.....
DS

I will shortly be introducing my patented "10-10-10" plan as well as my patented "10-J-Q-K-A" plan to jump start the economy because as everyone knows three 10's beats three 9's and a straight beats trips any day.

To 12:29. You can't possibly be DS. That would be his first and only post without a spelling or typographical error. See 5:55 pm as proof.

To 12:59. My teenage daughter wasn't available. She is the only one who can help me in that area.

Is this genius the same Williams Pena Wells running against Fleur Lobree......

The United States acquired the Spanish colonies of East and West Florida in 1819 by virtue of the Adams-deOnis Treaty. At the close of the Spanish American War of 1898, the United States and Spain signed a treaty which “abrogated” and "annulled” all prior treaties, including the Adams-deOnis Treaty. This article proposes that having handed over sovereignty of the Florida territory, the United States merely occupies the area as a colonial power, subject to the provisions of the United Nations Charter, which provides for territorial self-determination of colonial peoples.

What a track record

Does sam slom come with maria ortiz to circuit when she gets the seat?

Ivonne Cuesta is a sanctimonious, two faced moron. God help Miami-Dade County if she ever gets on the bench!

Ivonne Cuesta reminds me of Rippingille. Anybody else?

Cuesta would be ok but typical pd -never been in private practice and never had to earn a living on her own so I'm not sure how she'll treat the private defense bar. Plus I hear she's a bit of a control freak as a supervisor. All we need is another Tunis.

Captain
Yes its I , the Real DS ( or as Mrs. S sez - TU perro ). Just got lucky on the lunch time post [ and also used spell check] lol. Ask me when U see me about Ivonne Cuesta - we were partners years ago in Bagley. The`555p post was w/out spell checkkkkk
( as this post is w/out).
DS

Just had my 2nd shot and saw this. Old news to us in MJB.
Can you say dropsie?
thee reel
DS

PS
Bonnie Rippingale was the Student Gov't Teacher Sponsor at NMB SR. High, She was a teacher there when it first opened , when I was in
11th grade ( a Justice of the Student Sup Ct ) and David Rabin was 9th grade class Pres....
lol
the reeelll
DS

Why haven't there been any press releases or media campaigns regarding the honorable judge Milton Hirsh's new courtroom?

Exactly right. He and Rebull were up for the same seat -- and I want to say De LA O has been sent up more times than Rebull (but maybe not).

But De La O was the highlight of the investiture.

Fact is De La O is a class act. I've never quite understood the way some here slam him -- except some here live to slam.

Re: Jon rodriguez:
$100,000 of his own money! Is this job really worth it?
I can think of so many other things to do with that kind of cash.

Befera clearly the best person for the job, although I can not imagine why he would want to don the black robe.

11;51am. Donner spent over a million bucks of her husbands money to wear the robes and buy respectability.

de la O most definitely is a class act.

The reason some slam De La O is because he can be an impossible jerk to deal with.

He may be funny and entertaining but, he has a bad rep with many lawyers for the really stupid positions he has taken in the past.

He also has some very powerful enemies.

I hardly know him but, as the evidence code says, I can testify that he has a bad reputation in the legal community for reasonableness.