Baby Lollipops update: We received this urgent email from a loyal reader:
Rumpole: Breaking news at the sentencing phase hearing for the woman accused of killing her child: Judge Ward- yes you read that right- Judge Ward has momentarily crippled the State's ability to proceed. The case is set before Judge Reemeberto Diaz, and as the case began, veteran and grizzled homicide prosecutor Susan Dannely was momentarily stunned when Judge Ward ordered two thirds of her prosecution team to her courtroom regardless of the fact that they were beginning the delicate sentencing phase portion of the case. As the PD piled motion upon motion to the State, Dannely was reduced to pleading for "judicial intervention" to help recoup her prosecutors.
Rumpole says: This highlights a more important issue: the ridiculous nature of judges who order attorneys to their courtroom without regard for what the attorney is otherwise engaged in. And having been in private practice, Judge Ward should know better. But she is far from the only judge who acts as if their cases are the only cases that count. 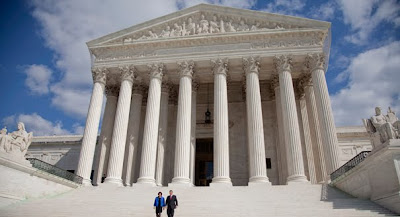 It's the First Monday in October, and you all know what that means:
Yes, they now change the soup menus in Au Bon Pain to reflect the Fall Harvest, but it is also the opening session of the United States Supreme Court.
Nick Allard of Politico has this Op Ed piece: "Mr. Chief Justice Open These Doors."
Because the great bronze door entrance to the Court, above which is chiseled in stone these words: "Equal Justice Under The Law", remain locked as the justices quiver in the face of terrorist threats.
Mr. Allred writes:
The diplomat George Kennan, in his famous 1946 “long telegram” from Moscow, which issued a stern warning about Soviet aggression, cautioned that the greatest danger that can befall a free society, in coping with foes who seek to destroy us and our way of life, is to allow ourselves to become like them.
For all of you Supreme Court groupies, the court today will hear Abbott v. US/ Gould v. US, which examines the fascinating question about the "except clause" of 18 USC 924(c). For those of you who practice federal criminal defense, the questions surrounding the 924(c) count, with it's 5 year consecutive sentence for possession of a firearm during a criminal offense, is an important one.
For the rest of us, we are just looking forward to the new soups.
See you in court.

Posted by Rumpole at 6:52 AM
Email ThisBlogThis!Share to TwitterShare to FacebookShare to Pinterest
Labels: US SUPREME COURT

Most of the cases (41 out of 50 the court has decided to hear so far) involve corporations. Corporations run this country - and even ran the war in Iraq and continue to run the war in Afghanistan. Why should the supreme court be any different?

Now off to Au Bon Pain.

...bummed about the suicide pool results! how could michael vick let me down yesterday. i am out for the year. thank you for the fun - while it lasted!

typical Judge Ward nastiness. She is no different than Flora Seff. Wish some Latina would run against her and put an end to her bullshit.

That is actually WORSE than Judge Newman telling his bailiff to get a panel right now when he has a courtroom full of pending cases just so he can show how powerful he is.

Diane, when will you get the message that we are busy people and don't sit around waiting for you to call and fuck up an otherwise decent day.

Loyal reader and the negative commenters have it wrong. While it is true that 2/3 of team Cardona appeared before Judge Ward at 9:30 and was asked to come back at 10:30 even though they were also scheduled to appear in front of Judge Diaz at 10 am, Judge Ward was very understanding when team Cardona did not appear at 10:30. When advised by Judge Diaz's JA that team Cardona was otherwise engaged, Judge Ward, through her staff, replied that she "was not worried." Loyal readers should know that time is a very fluid concept at the Justice Building and that most attorneys are asked to juggle appearances before more than one judge at the same time. Usually the parties and the judges make it work, just as they did today.