THE UPS AND DOWNS

of practising law in federal court have never been more apparent than in the last couple of weeks. Literally.

Have a case in federal court?
Here are your choices: The Dyer Building and all the mold you can breathe or...
the King Courthouse which has eleven floors, and ONE working elevator at any given moment. Don't even bother saying a word when you race into court 20 minutes late for a hearing. The Judge already knows. You were in the building a half hour ago, and that's how long you waited to get into an elevator.

Meanwhile, the Wilkie Ferguson courthouse sits there like a gleaming glass joke, laughing and mocking the lawyers trudging around it on the way to the Mold or the Stairs. A marshal recently whispered to us that on some days NO elevators were working in the new courthouse. And MOLD is not a word confined to the Dyer building. 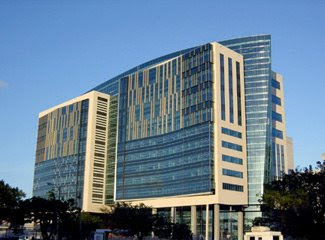 Yup, as surprising as it may seem to our federal architect experts, in South Florida, the combination of heat and humidity creates....all together now...
No- not weapons of mass destruction, but nice try Mr. Vice President.
It's Mold. And the Feds have plenty of it.

So there you have it. A nice juicy federal case walks into your office, and after the cheque clears (nobody takes cash do they?) you have a year ( or two weeks if you get Judge Huck) of running up and down the stairs of the King building; holding your breath in the Dyer building; all the while staring wistfully at the new Wilkie Ferguson courthouse, which combines the best (or worst) of the other courthouses.

See You In The REGJB, where the elevators work. And so do the escalators. And even when they don't, it's only six stair flights of courtrooms and most of us can use the exercise
Posted by Rumpole at 9:38 PM
Email ThisBlogThis!Share to TwitterShare to FacebookShare to Pinterest
Labels: Federal Court

wanna laugh? I mean seriously laugh out loud. Go to gamepolitics.com - Rumpole has the link on the front page, and read the 180 or so comments about our best friend Fake Jake Thompson. There's a picture of Jake holding a GTAIV video game. The comments are LOL hilarious.

33 Incumbent Judges stand to be reelected without opposition (28 Circuit and 5 County). Eleven (11) contested races including 9Circuit and 2 County.

Deadline is HIGH NOON on Friday.

yes, high noon, when the leg breakers call their clients (judges) and say the two words they love to hear (no, not "not guilty") but, "you're fine."

The breathe a sigh of relief that they dont have to use that campaign money they loaned themselves, and that they don't have to even think about losing and having to get a job.

Then they internalize that the public must think they are doing a great job, not even thinking about reality, that they really have no idea who you are. If they did, they'd probably be horrified.

Congratulations incumbants, and congratulations to the local bar, for proving once again that we're a lot of talk, and nothing else

Fake Jake B. Thompson, Attorney at Law and Gadfly

Re: Felony Distribution of “Sexual Material Harmful to gadflies” by Best Buy

Best Buy, along with other retailers, is openly selling to minors “sexual material harmful to gadflies” such as myself.

This day they began selling the violent, and lawyer annonying-killing video game, "PUBLIC RECORDS REQUEST IV" to minors and gadflies in your jurisdiction.

The minor and/or gadfly playing this game can engage in interactive public record requests in a strip club; the woman’s head is placed on the lap of the male customer (the game player), and she puts her buttocks in his face. The couple then use the dancers blackberry to email a public records request.

The minor teen or gadfly player can and manipulates two female strippers to simulate photocopying the public records requested.
“I’d like to be the petition photocopied in this sandwich.”

There are multiple scenes of men and women, viewed from the waist up, engaged in bar proceedings. Disbarment has never been depicted so graphically in any previous GTA game.

One woman approaches a vehicle and says, “I’ll answer your bar complaint real nice.” Another, while engaged in litigation, exclaims, “I hate Judge Tunis.” Another who is an African American lawyer , says, when the bar complaint has been completed, “That’s what I call a soul pole.” The court scenes are nothing any minor should see, let alone interactively participate in.

Finally, after many of the bar proceeedings, the lawyer says “I am a lawyer and gadfly. My mother would be ashamed.”

Psychologists explain that the wedding of law with religion is extremely harmful to teen boys, as it makes a connection that proves destructive.

Please advise before the end of this week as to how you want me to proceed; namely, to which Metro-Miami-Dade unit you would like me to go to file a formal complaint.

I have no doubt that the judge before whom the material is placed (Other than Judges Tunis, Friedman, or Farina) will find probable cause that the open sale of this “game” to minors and or gadflies is violative of FS 847.012.

Please advise. Thanks so much

This is exactly why I hope JT files a bar complaint against you and prevails. Mr. Rumpole you are a member of the Florida bar a previlage not a right. You are held to a higher standard from other litigants, you are one election from being a Judge. You mock the legal system with this kind of mockery.

In short if you want to act like a 2 year old create a private club for idiots like you that only you and the three friends you have can rant all day. Stop with the BS of peoples names ending up in google searches because you have mommy issues.

"In short if you want to act like a 2 year old create a private club for idiots like you..."

I thought that was what we were doing here?

It gives me great pride and pleasure to be able to announce at my firm that it is now Shumie time. CYA>

The court will be losing about 30 people because of Crist's budget cuts. The clerks, bailiffs and judicial assistants are safe.

So who's getting the ax?