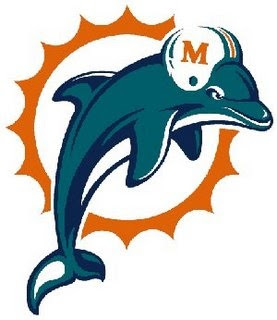 (send me your tired, your weak, your washed up and injured and "on the way out" veterans)
The Fins sign Chad Pennington, late of the NY Jets who just signed Brett Favre. The title links to the Yahoo sports article.
The Dolphins now have an estimated 64 quarterbacks in camp, with the number expected to rise over the weekend as other teams begin cutting QBs.
Rumpole says: In the league since 2000, Pennington is older than his years. Injuries have sapped questionable arm strength to begin with, and we do not believe he is capable of throwing the 20 yard out any more. If you want to know how important that throw is, watch Tom Brady- that is his out pass and he throws it better than anyone since Montana. Because Pennington cannot go deep or throw the out with zip, defenses sit on the short stuff and take away the routes, thus he gets sacked, injured, etc.
Just what kind of plan is it to  get all the other teams QB rejects?  It seems like a program designed for mediocrity.  And with the way things have been here, who wouldn't take 8-8 this year? 4-12 sounds more like it though.
See you in court Monday, its going to be a long season again for Fins Fans.
Posted by Rumpole at 7:13 AM
Email ThisBlogThis!Share to TwitterShare to FacebookShare to Pinterest
Labels: Dolphins.

I heard Vidal Velis is despearte about getting his wife (The Josie) elected that he is pulling out all stops and has started a "Get the Cueto Supporters" organizations. Onece Vidal identifys a Cueto Sspupporter, he confers with Josie and they put them on a black list, wonder what this Black List will be used for? Anyone have any ideas.

EARLY VOTING STARTS THIS MONDAY (AT LIMITED SITES) AND GOES UNTIL THE 26TH. EVERYONE GO TO THE CANDIDATES' SITES AND SOME HAVE THE EARLY VOTING SITES THERE (YOUR REGULAR SITE MAY NOT BE AN EARLY VOTING SITE). EVERYONE SHOULD VOTE! IF YOU DON'T GET OUT AND VOTE, YOU GET WHAT YOU DESERVE ON THE BENCH!

Last chance to send in your letters to the Supreme Court JNC. Interviews begin on Monday and continue through Wednesday. The committee will then send their nominees to Gov. Crist for the two seats.

josie velis is an fing joke.

so 2 are the majority running this year

rumpole,, who are you supporting if any?

I have the dubious honor this year of having to vote for judicial candidates who are too stupid to 2nd chair me at trial, and who have less courtroom experience than my secretary.

What a revolting development this is !!

“Not a bit of useful information has been provided by Ms. Anthony as to the whereabouts of her daughter, and I would add that the truth and Ms. Anthony are strangers.” ~Judge Stan Strickland~

LIE: According to the Orange County Sheriffs charging affidavit, friends of Casey Anthony said in a sworn statement she is a habitual liar who once stole $700 and checks from a friend. They state she told them on different occasions that Caylee was with a nanny.

LIE: In early June, Casey Anthony told her mother she was being sent to Tampa for work and would be back in a few days.

LIE: Later, Casey said she was going on a “mini-vacation” with friends (friend = Jeff Hopkins?) and taking Caylee with her.

LIE: Casey also told a former boyfriend (Jessie Grund?) on June 25 that she would be free to get together because her daughter was “with the nanny and that they had gone to the beach for the weekend.” A friend of the mother contacted authorities and told them he spent the weekend with Casey Anthony in late June, and at that time, according to the friend and the arrest report, the child was with a nanny.

LIE: Casey’s mother said she had been asking to speak with her granddaughter but that Casey made excuses that she could not talk to Caylee because “she’s with someone else or she’s swimming or napping.”

LIE: Casey’s parents became concerned after they received notice that her car was towed from a check-cashing business where it had been parked for days and it was no where near where she told her parents she was staying.

LIE: According to Casey, she had dropped Caylee off at her babysitter’s July 9th between 9:00 and 1:00 —- but was not reported missing until five weeks later when her grandmother reported the information to police.

LIE: Casey said she was doing her own investigation into her daughter’s disappearance over the past five weeks instead of calling 911. Casey said that she saw movies and reports that if people in similar situations went to police, they had gotten hurt. Casey also she did not report her daughter missing because she wanted to find the child herself to spare her parents the sadness of their grandchild being missing. Two of Anthony’s boyfriends told detectives she never acted upset or mentioned her daughter’s disappearance.

LIE: Casey Anthony says Caylee’s baby-sitter was Zenaida Gonzalez, at the Sawgrass Apartments off Conway Road. A woman named Zanie Gonzalez never even lived here. (In addition, the apartment Casey pointed out to detectives proved to have been vacant for 5 months since Feb 29)

LIE: Casey said that — while doing her “own” investigation — she also went to clubs that the baby sitter, a woman she identified as Zenaida Gonzalez, is known to frequent.

LIE: Caylee’s baby-sitter, Zenaida Gonzalez, had been a family friend for four years and cared for Caylee for 18 months. Contacted by detectives, a woman named Zenaida Gonzalez told them she never met Anthony or her missing child. She did not recognize the mother or daughter from pictures.

LIE: Casey also directed deputies to a complex on North Hillside Drive, which turned out to be a senior facility.

LIE: Casey said Zanie’s mother lived in The Crossings at Conway. After knocking on several doors, no one knew of Zanie or her mom.

LIE: Casey had told her parents she worked as an event planner at an area theme park. Investigators say Anthony was unemployed

LIE: Casey said both she and the alleged babysitter Zanie worked at Universal Studios, and that Casey’a job there was the reason she needed a babysitter. But after entering a building and pretending she knew where she was going, she admitted she wasn’t an employee there. (She was fired from there in 2006.)

LIE: Casey claimed she had been so concerned that she told two co-workers at Universal Studios her child had disappeared. Neither person she named works at Universal.

Message to The Bar: GOTCHA!


"PAID FOR BY THE FLORIDA BAR FOUNDATION"!