Before we begin on another brilliant exposition, our readers have suggested and seconded a "person of the week" for the blog. We listen to our readers. However, the readers will need to contribute to make it work. Make your nominations (judges are people too!) and the reason why, and we will choose.

On a bright spring day on the last day of April, 1975, Saigon fell and the Vietnam war ended. Over fifty-eight thousand Americans died for a war that the Generals and Johnson and Nixon and Kennedy for that matter knew could not be won.

In his exceptionally well written new biography- Nixon, The Life, John Farrell, the first Nixon biographer to have access to all the White House tapes, writes that Nixon clearly understood as he ran for President that the war could not be won.  Yet Nixon was so desperate to win the presidency that he feared a Johnson led peace effort in 1967 would lead to a Humphery victory in November. So Nixon's used Anna Chennault- a fascinating character of the mid and late 20th century- to sabotage the nearly complete Paris Peace Talks with North Vietnam by having Chennault tell the leaders of South Vietnam to reject the peace accords because Nixon was going to win and Nixon was personally assuring them that South Vietnam would get a better deal with Nixon as POTUS.

The continuation of the war was all in the name of American prestige and the Domino Theory- which for you prosecutors and PDs and Judges born in the age of Starbucks - held that the loss of one democratic country to communism would cause neighboring countries to go commie as well.

Nothing could be further from the truth, as China and North Korea and Cuba are the only remnants of a failed collectivist political and economic philosophy .

There was a Domino theory that
was going to save South East Asia
and for that matter, the world,
from Communism: It was called
Capitalism.

When given a choice, comrades
will choose Starbucks Coffee
over collective farms.

Which brings us to North Korea.
There is no doubt that the
concentration camps North Korea
runs are well beyond the killing
fields of Cambodia. But the
capital of South Korea is within
artillery range of the
border, making a military
campaign impossible.

Ronald Wilson Reagan brought
down the Berlin wall
and then the Soviet Union without
firing a shot.
Trump can do the same in North
Korea with sanctions in
conjunction with China.

It turns out the Domino theory was correct. It was just the wrong Domino.

It wasn't this Domino

It was this Domino. 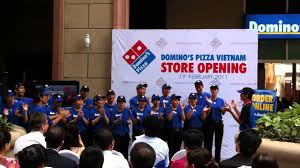 Nikita Khrushchev famously threatened to bury the west. Instead, you can dine at a KFC a short walk from his tomb in Vladimir, Moscow.

The Domino theory was correct after all.

From Occupied America, Fight the Power.

Posted by Rumpole at 11:05 AM
Email ThisBlogThis!Share to TwitterShare to FacebookShare to Pinterest
Labels: Vietnam

As for our Justice Building Person of the Week - I would nominate JUDGE MICHAEL HANZMAN.

Judge Hanzman is so deeply committed to all of those who appear before him. He has so much compassion for those in need of a real justice system in order to right the wrongs of society. In Juvenile Court for many years, he formed loving and kind connections to those children hurt by their own parents, abused, abandoned and forgotten by the "system". I know from being his best friend how much he loved all of these children caught up in the Dependency division. Judge Hanzman made a difference in the lives of these "forgotten" children.

Moreover, while doing good for the legal system, he trained young lawyers in how to properly and effectively represent their clients with absolute integrity. The written opinions on complex law improved our system of justice. Even the Third District were blown away by the academic nature of the well reasoned opinions.

In criminal court, Judge Hanzman is acutely aware of the legal positions being posed by all parties. Victims are protected and cared for. Defendants Constitutional rights are vigorously protected. The lawyers for both sides are treated with incredible respect and patience. All can be assured that the Judge will be prepared and rule according to the law and the facts - not rule because of a gut feeling or a predisposed prejudice.

Judge Hanzman deserves to be recognized by us - because he seeks no recognition or validation for his hard work, caring and his many years being dedicated to our system of law. A true Academic on the bench. One with a loving and kind heart.

Umm....what did he do this week, which hasn't even started yet? No wonder why Rumpole is crank with readers who can't follow simple instructions.

I agree on Judge Hanzman. Kudos.

Umm2, how does someone who doesn't even live here, doesn't work in the building any more, hasn't been a judge or practiced law in years, have so much to say about a current judge and his qualifications for person of "the week? What did he do, read a couple Herald articles? He may want to talk to some of the lawyers who practice before him.

Jonathan Colby is not my best friend.

Rumpole, your domino theory fails to mention that Viet Mam, like China, is run by an oppressive communist dictatorship that allows some capitalism for the convenience of the regime.

Why should a judge "care for" a victim? A judge isn't a doctor or mental health professional. A judge shouldn't care for a victim any more than she should care for a clerk or a lawyer. A judge can recognize a victim and consider a victim's wishes, but I am loathe to award a judge for caring for victims. A judge should be neutral. The prosecutor has victim advocates who can get victims coffee and social services and lend a (needed) sympathetic ear. I'm not anti-victim. But I judge should scrupulously fair and enforce the law. I worry about a judge granting a motion to suppress and letting a sexual predator free when the judge cares for the victim even though the law and facts would support granting the motion. Lets see Hanzman do that a few times and then he can be person of the week.

Who is a brilliant and effective Judge.

They will say Judge Mike Hanzman.

The same would be true with the real trial lawyers. This Judge is the best that the Justice Building has ever seen.

Any criticism in these posts are from jealous and envious other judges. Use common sense when you read "haters" statements.

The Public Defenders in Hanzman's courtroom are thrilled to have a constitutional scholar, author, trial lawyer and an all around respectful judge with excellent temperament. Everyday. Their clients are blessed.

Even the lawyer who had a fire in his pants on closing argument agrees that Judge Hanzman is finest Jurist at the Justice Building.

I agree with Colby regarding Judge Hanzman. I have appeared before him and he knows the facts of a case even better then some of the attorneys. He is very practical and will not tolerate BS or fools lightly. He has absolutely no "black robe fever" and is fair and listens to all that appear before him. I have probably appeared before a thousand judges over my career in both state and federal courts, In Florida and though out the nation. The only two judges I can recall that are in his caliber are the Late, great Judge Ed Cowart and USDC Judge formerly of the EDNY, John Gleeson. Judge Hanzman is head and shoulders above most of the others Judges, especially those coming from the SAO directly to the bench.

Hanzman was...adequate at best from the little I remember.

Meeeeeeeester Rumpole, I've been asked about Judge Hanzman as a lawyer.
And I have to say, as ve say in Venezuela, Oy...so so.

I believe Vietnam & Laos are both still titularly, Communist as well.

Thanks for censoring my comment. "Fight the power" as you say